Visit to the Catherdral and to the patch...

A lunch stop at the cathredral to catch up with the Peregrine chicks was a good choice!
As i arrived i looked up from the car park of the Adam and Eve pub to see not two but three Peregrines in the sky.I watch as the parents landed and noticed they were getting agitated .I decided to investigate more and drove round towards the main entrance.I then soon got on one of the young Peregrines on the lower part of the building- this expained the parents concern. These two chicks had only just fledged .The young that I was on was the male and looking smart and ready to take to air any time soon. 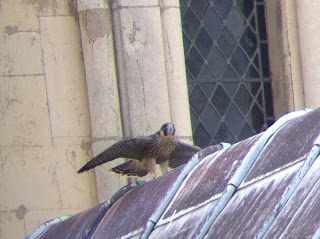 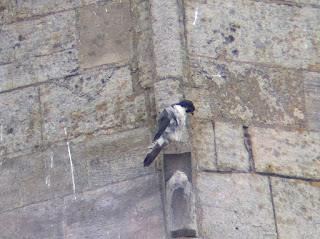 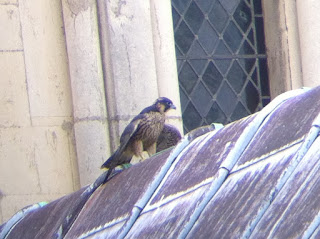 A quick trip to patch produced 2x LRP on the scrape along with 6x stock doves( cracking bird) 2 mallard duck families-1 with 7 ducklings and the other with 6. A pair of Garden Warblers were in the shrub along the path and a male Marsh Harrier hunting over the marshes .2x Cettis singing & a willow warbler and Chiffchaff were both singing along the railway line. Then 7x Lapwjngs flew over the marsh as made my way over the bridge.

Happy birding
Shaky
Posted by shaky at 20:51 No comments:

Saturday evening i nipped down to the patch with the sun shining after a miserable morning.I had Cettis at the bridge and then was greeted at the footpath by a reeling Grasshopper Warbler.

Super, cracking views of it out in open ( this was my best ever views of this species) also lrp on scrape and a low flying cuckoo over the marsh path. But star bird for me was a hunting Barn owl which was a patch tick for me and bringing my total for here to 94 !

It was a Beautiful evening and ended of with a Cettis out on show at the bridge as i left- lovely jubly!


Happy birding,
Shaky
Posted by shaky at 22:31 No comments:

Last week was a busy week at work and full of new fledglings every where!
While at work at cringleford on Monday last week I had a Kingfisher over bridge & at the river 2 x Grey wagtails attending a single juvenile at nest.
At Keswick on Tuesday I had an afternoon watching a pair of  Hobbies hunt . They were going through the Swifts and one even went for a Pied wagtail . Also at Keswick a Common Buzzard over head . On Wednesday i had a fly over Hobby , Thursdays highlight was a rather unpleasant one as i watched a Jay kill a newly fledged Blue Tit & on Friday i had not a bird sighting but my first ever sight of a Mole!

Ive picked up a new garden tick as well in a Common Buzzard. Been expecting to get this species ticked off for a while now so it was a pleasant surprise to look up while taking George out for a walk.
Also last week one evening me & Jim went to Colney to see if the reported Golden oriole was still around- the simple answer is it wasn't but we did get to see a Grey Heron, Common Tern ,Oystercatcher and a cuckoo so a good little spot!
Now back to the patch (finally!) along with Jim on a beautiful spring evenings yesterday -all was very quiet . There was Swifts galore in the sky above and a pair of Pochards on the water were a pleasant surprise(didn't have a June or July record for them being here from last year) along with couple of Tufted ducks . Then I spotted a Hobby whizzing through the air giving great views in the sunlight. We continued round and with my 2 week absent from the patch one thing that really stuck out was that  everything had grown and the pathway was as narrow as I can ever recall. Round at the scrape I had another summer visitor over head , a Cuckoo & again great views. As we made our way round back to the bridge a Sparrowhawk and a hoovering Kestrel were picked up .
Jim suggested we set off in search of our own Quail( a bird I had never seen or heard) . We found some suitable habitat and begun to walk and listen out for a call. Plenty of Red Legged Partridges about, getting noisier as the  sun was setting and then a lovely Hobby flew over as a Tawny Owl called . We never did get to here a Quail but this is will worth a future visit to hear one.As we left Jim spotted a nice Barn owl hunting which flew over the road in front of us.

A trip to strumpshaw fen today gave me great views of 16 + crossbills. (2 flocks of 7 and 9)  and some rather nice pictures too!(not bad for digi scoping) 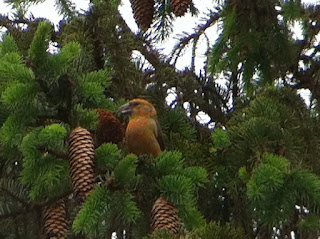 All in all a good weeks birding!
Happy birding,
Shaky
Posted by shaky at 22:14 No comments: