December- Waxwings, Trip to the Brecks and a bit of Goosing!

So before I get to Decembers highlights let me mention the Novembers bird of the month.... the Waxwing!  I had the pleasure of seeing a flock of around 15-25 at the top of my road on Jenny Lind Park . Some cracking views were had- Full of character and always looking smart when perched or feeding. It was nice to watch them as I passed on my way to work every morning and would try catch them on my way home too . Apart from that the end of November was quiet. 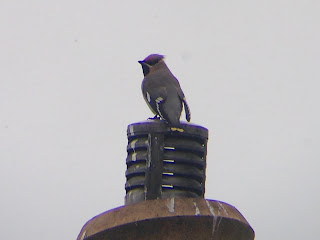 ﻿
The patch was fairly quiet too. Most visits have produced the female Marsh harrier and a nice flow of Starlings east and Meadow pipits roost in to good figures but best bit of birding I did was some birding away from the patch.
First thing of mention is the Red Kites I had in a Location in Norfolk. Was lucky enough to see many togethrer which was A great sight to see indeed .but enough said there.
Now to the middle of December - After a few phone calls me and local birder,& friend Matt shore decided to head into the Brecks with a couple of target species in mind but mainly just to get out and be amongst the beautiful surroundings that the Brecks offers on a nice winters day and weather was better then we hoped too with blue sky s and mild temperature for this time of year

We headed to one of the known areas for Golden Pheasant and within 30 minutes we were watching a Reeves Pleasent ( not what we expected but a nice bird indeed) . Matt soon after got on a Golden Pleasent only for me to miss it as it went out of view. But it wasn't long to wait as I soon was watching 3x Male Golden Pheasents  and again the male Reeves from earlier as went a out feeding. Super birds to watch and a good start to the day!
Next we meet up with another local birder/friend, Tony and headed to a area I'd not been to before but matt lead the way, and soon we listening to a flock of around 10-12 X  Bramblings and watched as they landed in the tree tops beside us . Again a bird I wanted / expected to catch up with today so I was chuffed. As we walked at  least 5x C buzzards called overhead as the sky lifted and temperature rose. As we carried on round seeing Marsh & Coal Tits a plenty accompanied by the ever calling nuthatches we came across some Siskins . As we watched matt picked up 2x Redpolls & then we picked up a Bullfinch as Some calling Crossbills went over head. This area was now alone with birds , tit flocks passing through as we walked back to cars for lunch .
We decided to head to santon downham and try for the Hawfinches and as soon as we arrived we had one on the tree tops but even more noticeable was the 150-200 x Brambling which were busy feeding in the ground below the trees and at times on the road itself.  A total of 3 X Hawfinches we seen and probably by Best views along with the ones a few years back bear feeders at Lynford . We stayed there for an hour and watched these cracking birds as they grew in size as more and more extra birds added to the flock . After here we checked in on another spot and searched for a few Breckland specialty s but no joy.  A super day and great company too Matt!

﻿
﻿
Then on to the 27th December where my family and York family meet up the day as we always do around Christmas at Sandringham. After a cracking afternoon on the grounds ( and some tea & cakes!) me & Yorkie mention to the girls "there a couple of nice Geese not far from ere.." .. Before we knew it we were on a minor road near Docking and scanning through 2-3 thousand Pink Footed Geese hoping to pick out Todds or Red Breasted . The Todds had been reported there around lunch time but the red Breasted had not been seen since Xmas day so fingers crossed.  After 20 minutes of scanning through my scope and a few others too who had been there a few hours Andy  shouts " I think I've got the Red Breasted Goose!" ... After a few moments he managed to get me and the other birders  on it , what was what even more impressive was he was the only fella there who didn't have a scope and picked it up with just he's bins ! Well played " I shouted back as I ticked my final lifer of 2016 putting me on 277  .  Truly stunning for a goose !
Quick clip here;

Then shortly after we had a Barnacle Goose too was picked up ( probably my most tick able one I've seen after my regular Buckenham ones !lol) . We left off after 4 pm and pleased to have helped get the news out quickly through the birder next to us and saw a few arrive who were very grateful to see it as we left.
﻿
﻿
A great December and sure next year will be as good if maybe better ?!

Happy birding ,
Ricky
Posted by shaky at 09:52 No comments: