So lets start with the patch! One visit in the middle of the month produced me with a common buzzard over head and my first singing cettis after a quiet month or two from them. A tit flock got the  blood pumping, containing 2x coal tits and a single great tit,4x blue tits and 3x juv chiffchaff s which were very entertaining to watch. A male blackcap and a couple of grey herons over ,ended a quick but pleasant visit
A more recnet visit produced more the same but a bit more action . 2 x cettis singing was very welcoming and then too was a huge flock of lapwings which took to air from marsh scrape.Two counts of 68 and one of 69 . My second highest count for the patch!
As I walked along I got some pictures of a few darters . Not the ruddy darters from last month but these were common darters. A picture of one below from the cattle pen 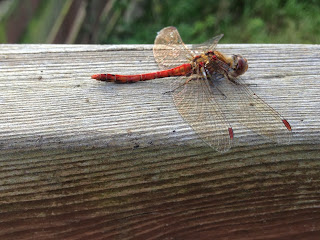 I bumped into Chris on the way round and we got chatting as we walked.He shared some of his knowledge of insects (among other things ) with me something ive got to sharpen up on . We noticed a number of butterflies (comma, red admiral  and small white .) and a huge amount of hoover flies.
As we walked I spotted a high soaring Common Buzzard and then among  the trees and bushes  further along  calling was a quietly singing Garden warbler . Then viewing the broad a single juv swan with both parents and an Egyptian goose. On the shingle spit was 4x common snipe at rest along with a juv moor hen .
﻿
Now to today!
As I worked in 3 scores,Bowthorpe  looking up at the remaining House martins I noticed over the lakes(Colney GPs or also known as Bawburgh Lakes) a low flying  Osprey!
It was casually fishing and dropped down 3 times , but without any meal  to show for it. This was my best find to date and a work tick too. Earning while birding....just the way I like it -;)


The bird was present the whole time I was there (11.20- 1.55pm) . I had no internet excess so let Jim know to put it out for me so hopefully some other birders would have also got to see this super bird.

Happy birding
Shaky
Posted by shaky at 21:37 No comments:

With George now fast approaching 2 yrs old I thought it was time he graced the field and I decided that Strumpshaw fen would be the best place to start . We turned up around 2 pm, & George was all freash  faced as he had had a nice little hours kip in the car . As we approached reception a quick look at the feeders and a beautiful Nuthatch was in full view. I was able to point it out to him and was surprised to see it wasn't bothered by George's eagerness as he leant forward towards the bushes at the edge to get a closer look!

Cracking bird to see this close, (one of my favourite british birds along with the Bullfinch )

We strolled into the reception and after George proudly showed off his membership card he was more then chuffed to realise he would be receiving a sticker from the friendly staff .  In fact she gave him a few to take away( all of which ended up in his animal scrap book. )
We walked along the path slowly with butterflies galore for company.  When we arrived at the meadow trail George immediately picked up on all the camera men and begun to investigate . He was loving the little Damsal flies( azure in think ?) chasing then around through the grass. A dragon fly whizzed over head and landed on a stick which was at the dyke edge. I careful held him up and luckily it stayed there long enough for George to view it and then  you guessed it.... He reached out for it , but he's gonna have to get alot quicker if he's gonna catch one of these speedy Gonzales !
We made out way back ,in doing so watching the beautiful butterflies gently passing by in front of us. I really couldn't have picked a better day for it with the weather being perfect conditions for them.
Back at at reception hide we told of an otter which was in the water. Sadly it wasnt close enough for George to see but what he did get he's keen eyes on was a kingfisher. It was calling away as it made its way towards us and landed on the favoured perch ( those regulars to strumpshaw will know the spot)
How much of  it he saw i don't know but what was more important for me was that he was getting excited about seeing wildlife and in its natural  environment . As we left I begun reminding  him of what animals we had seen- birds, dragonflies, and butterflies and then .... The train flew by as we approached the crossing !
Well u can Imagine the excitement of this , for a boy  who is Thomas the tank engine mad this was fantastic !
When we got home Caterina started to ask what it was like at the reserve and what he had seen but all his reply was  "Cho choo ,Cho chooo!" Mum looked at me confused and i begun to explain. The wildlife might have come second to the train on this occasion but there be more visits to the reserves !
Happy birding
Shaky
Posted by shaky at 13:16 No comments: