That's what it has felt like the last week and a bit at work. These fresh/cold clear mornings with blue skies and with bulbs starting to flower- but what makes it even more like spring is the fact that birds are singing everywhere! I had 6 singing Sky Larks at Marsham on Friday & Great Tits calling from what seemed every tree i saw! They really own the tree space at the moment & ive had a couple calling from our house ariel and from the hedge out front of our bedroom every morning.Waking up to see to little George at first light these last few weeks has brought to my attention that so many song birds are at the top of there game right now and seem to be using the street lights as there companion.
A wonderful chorus saturday morning was a perfect time to start my RSPB Big Birdwatch with little George too( not too sure how many birds he actually saw but he seemed to be enjoying his self).
I put up our first bird feeding station 2 weeks ago and only a few birds have appeared . So  i wasn't really banking on too much but things were looking up after a slow start. We had a few Great Tits, Blue Tits and 2 cracking Long Tailed Tits along with a Blackbird and Collar Dove.
Finally Monday morning was like any other cold start to my working day until a flying Woodcock came straight over the van heading south, towards Eaton. A super bird to have seen from my house in the city & a great start to the week .I hope its not the last Woodcock i see before the winters out!
Happy Birding,
Shaky
Posted by shaky at 20:28 No comments:

local patch visits and a couple of new species...

I have made two visits to the patch in the last 4 days . The main attraction has been a Ferruginous Duck that i have yet to see but have enjoyed watching the variety of Wildfowl that has gathered on the broad itself. I picked up :
Snipe x3,Teal  x6, Gadwall x18, Pochard x2 and Tufted x18. As i left speaking to local birder Mike a nice hoovering Kestrel overhead and then 8x Pied Wagtails off to roost (wonder where?) were a nice end.
The weekend i was able to catch up with the Western Sandpiper.I'm probably the only birder left to have not seen it as being a new dad now i just haven't found the time but luckily it has stayed around and i was rewarded with some close up views from the hide. 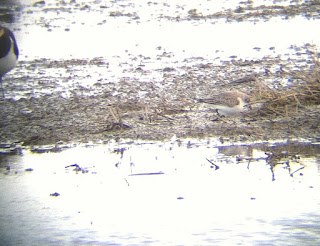 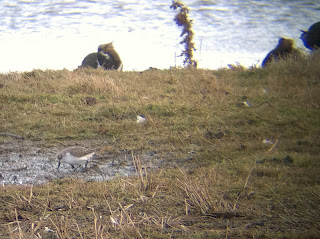 I had time to nip in at Kelling on my way home to see the flock of Redpolls that have been enjoying the food that has been put out in a garden by a friendly birder.Cracking views of 2x Artic s and a rather smart Mealy among the flock of Lessers. Really great to have em this close and even managed a few ok photos (once again on my phone ,so bit rough!) 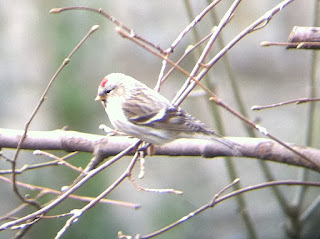 Its that time of the year again when find myself  i nipping down after work to KFC on Dereham Road (no not for my yearly greasy treat !) to catch up with our Scandinavian friends the beautiful Waxwings!
They were sitting in the tree tops as they were last year and the year before.  I counted 32 in total and they were going about there business of tucking into the juicy berries below.There stunning detail showed up well in the bright sun.

After a while i turned my attention to the flock of Redwings in trees nearby.I counted 64 in total and although the Waxwings are the main attraction here ,on any other day these chaps would have all my divided attention!

A nice end to a cold days work,

Happy Birding,
Shaky
Posted by shaky at 20:03 No comments:

Trip around the Broads and birds galore at the patch!

Saturday was a chance for me to get out for some quality birding. I weighed up my options & taking into consideration the high winds i decided on leaving the jewels that the coast had to offer but instead headed for the Broads!
I started off with a visit to Buckenham on route and was pleased to see the Lesser WF was showing well not far from the station car park . It was among the Bean Geese as it has been.Also of note was the huge flock of Golden Plover and a nice Peregrine Falcon.  I made my way to Ransworth for the Ring Necked Duck .It was showing well from the car park and was a nice easy view. I stopped for early lunch and then headed to Rollesby for the Great Northern Diver.
This diver was also showing well from the south side of the bridge and was looking rather smart in the now bright sunshine.A nice Kingfisher and a low flying Sparrowhawk were picked up before i headed off to meet Jim. We were in search of Raptors and once at the desired spot we were greeted by a smiling James who i last saw a year ago at Ransworth when he helped me find a Mealy Redpoll(top bloke!). Despite the strong winds we had some cracking action :
3x SEO's ,4x Barn Owls ,1x Marsh Harrier,1xKestrel,a flock of 35x Whooper & Bewick Swans & a Golden Plover flock. A big thanks to James for picking out 2x Common Cranes feeding.With use of his scope we had cracking views of these super bird- a nice end to the day! 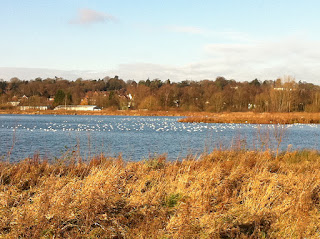 Thorpe/Station Marshes
Today on my lunch break i headed to the patch and was greeted by a super sight of birds everywhere! Gulls were gathered on the Broad itself and more still in the air.I counted more then 800+ BHGulls. Also wildfowl numbers were higher then they been with a mixture of Teal, Gadwall, Tufted and Pochard.
Over the Marshes were the biggest flock of Lapwings ive seen here,at least 120 + ! As i got closer to the flooded marshes i noticed 5x Snipe over the back and then a flock of waders on the edge. These were 28x Ruff , my first for the patch which made this my best lunch break to date!


Totals-
On the Marsh:

Happy Birding,
Shaky
Posted by shaky at 22:15 No comments:

For those of you who have been following my blog you may have noticed that Ive been absence the last 3 months, well Ive become a father to a gorgeous boy, George. Hes been keeping me & mum very busy so birding has been put on the back burner but i did however get to my local patch on 8 visits among the first couple of Weeks of November for my most exciting patch migrant to date.. a Short Eared Owl!
I cant take the credit for finding it but have local birder Simon to thank, who kindly alerted me of the bird on 28th October. I went down the next day and after waiting a few moments i was watching this  super bird hunting over the marshes. Over the coming few days i managed to work out roughly where it roosted and its favoured perches.I managed to record some interesting footage of it one early evening being mobbed by a number of Crows and Magpies before landing on a fence post near to where i stood. Next he took up and spooked a flock of 11x Snipe which ended up taking to the sky.I had never seen a flock of Snipe in the air before, only ones on the marsh or scrape edge, so watching and hearing these as they flew round against the setting sun was a real moment.
I then was lucky enough to have the bird land even closer to me ( i had hidden up in a bush ,in Johnny Kingdom fashion). I too my moment  to study this superb bird and look straight into its striking Yellow eyes, surrounded by its buff white facial discs & black patches. A real picture moment!


I had 7 more visits to the patch to catch up with this bird and every time was an absolute pleasure. It was here for a total of 14 days to my knowledge, the 11th November being the last time i saw it.
I managed to get down again one last time on Friday before new year's and managed to pick up my 76 bird for the patch! I caught sight of a Woodcock as it took up and flew over the river, landing in the woods at Whitlingham on the other side. Other then a nice singing Song Thrush and the expected winter wildfowl it was pretty quiet.
Ive really enjoyed watching the my local patch this year, through the seasons and seeing birds come and go.Probably the highlights for me were a passing through Wheatear which stayed for a few days, watching the Great Crested Grebes rear there young, Green & Common Sandpipers and a drop in 4x Greenshanks, a reeling grasshopper warbler and of course the Short Eared Owl.I ended up with 76 species for the patch in 2010 which i had only been recording from the middle of April, so i hope this year to be able to make it nearer to the 90 or even 100 mark with a full 12 months.
So all that leaves is for me to say a big thank you to all of you who have kindly helped me out along the way , weather it be details of a local sighting or joining me out on the field and sharing your knowledge , its been all been appreciated!
I look forward to bumping into you all soon -   Happy birding and Happy New Year,
Shaky.