Working on a Saturday is something I rarely do nowadays as weekends are kept free to be spent with my wife and kids but job came up in Snetterton which was too good to turn down. With the hot heat and tough work to be done I wasn't that excited as I pulled up outside the dirty huge unit i was to clean. 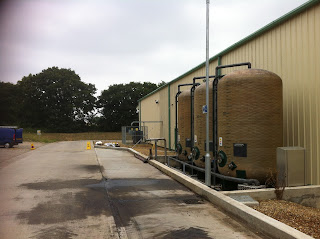 Once I set up & begun to wash it down I immediately noticed a huge amount of white moths taking to the air only to return again to the unit. I stopped and inspected . There were a few together low down so took a snap on the old  I phone ( other phones are  available ) and sent it to James (birds and beer) and sir Bradley( no not wiggins the other well known one..... Jim from Jimsbirdingblog) . I knew between then they would ID it. Well within minutes a reply! It was a yellow / brown tailed moths I was told. Inspected a bit more and they were Brown tails.  New to me but what was more interesting and made for rather a beautiful sight ( considering I was looking at a filthy warehouse unit!) was that there were a total of at least 17 and probably more! Once again explain by the knowledgable pair , that there had been a recent emergence and this was the result-Marvellous ! 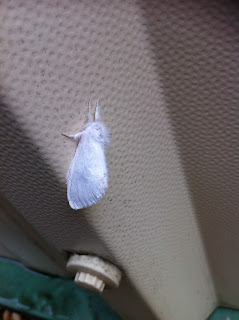 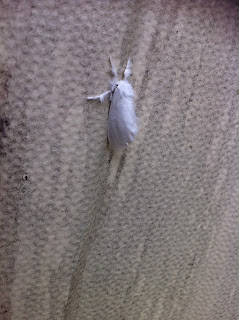 As I continue my morning more different types of moths/ Microsoft were taking off as I disturbed  them. A Buff ermine being one particuly enjoyed. 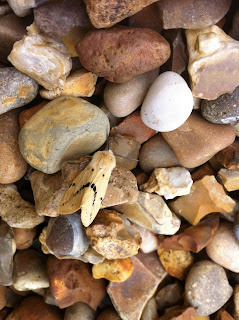 I would point out at this point that I tried my very best to get them off without any damage to them before i washed but obviously I couldn't spend all day gently tapping away near them , waiting  till they took off... I had work to do!
The afternoon brought more surprises ( not my lunch , although rather good I must say) , in the form of a number of butterflies in the meadows surrounding . But one small one landed in the small pool of water that I had created through my washing of the unit on the groubd beside me. It seemed to be drinking or at least  doing something with it? I sent yet another picture to jim and James am,to be pleasantly surprised to find out it  was a Purple Hairstreak -Another newbee for me!
This was turning into a pukka days work. 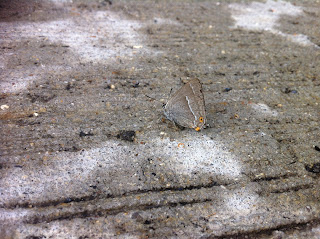 I noticed after speaking to Jim that two more purple Hairstreaks- male & female ,flying around the tops of the Oak tree behind me .  Such a great moment .
I also enjoyed a pair of Pied wagtails feeding young in among the  roof vents , along with some rather noisy Swifts overhead .
I hope that next weeks work there is half as good as this day ,then I know itll fly by!
Happy birding
Shaky
Posted by shaky at 20:22 No comments: