So I met up with Matthew shore at the north Norfolk coast on 6th October and started off meeting him up on the "Little eye". A new spot for me & I quickly see why he enjoys it so much.  Great view point and nice location.  The winds were north west so not the best but not the worse at all so I scanned away . Matt had started early and already had a Sooty Shearwater and Bonxies among lots of Auks. I enjoyed the steady flow of Guilemonts along with Red throated Divers,Gannets and flocks of Wigeon and Teal.  Also a rather tired looking Turnstone sat resting on the shingle .
﻿ 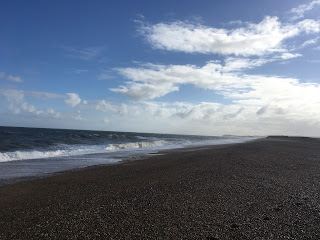 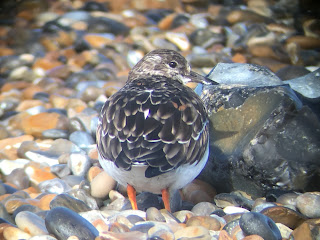 We decided to check out Gramborough Hill for a bit but it was completely quiet of any birds other then some Stonechats.
We decided to decide where to head next while we are lunch. Seeing there was a Red necked Phalarope at Kelling Quags, we decided to head straight there.  As we approached we scanned the south of the water . Couple of Common snipe and a smart Greenshank before I picked up a couple of Dunlin and a Curlew sandpiper. My first CS of the year and a nice bird indeed.  We continued round and was greeted with superb, close views of the Red necked Phalarope ! We enjoyed Superb views and too the 4 birders
who were also there. 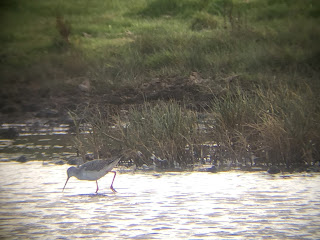 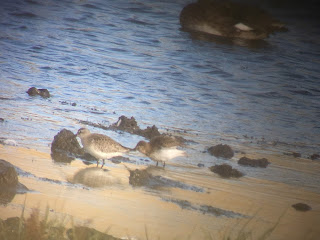 https://youtu.be/tDo4fDyEQz0
After half hour we scanned away and was soon on 2x Spotted Redshanks- a smart adult along with a Juvenile .
With me needing to be back in Norwich for 5.30pm I decided to pop into Cley on route home with matt.   Glad I did as the Little stints were putting on a nice show ! At least 20+ were counted .  Also 5x Juv Ruff (2 Ruff seen earlier at Kelling) bookended a nice day up on the North Norfolk coast.  Great to catch up with Matt and enjoy a new place too in "Little Eye".
Happy birding

East Coast to find some Migrants...

So as September drew to an end  I decided to nip off work at lunch and go to Waxham.
Ive not visited here for couple of years and wanted to be somewhere alone and find  for myself  some passing migrants. The day previously had been good as regards birds moving through along coasts( although still no East winds)
Alone I was, as I only got to see one other birder (Ben Lewis) and a Photographer, not even a dog walker!
Parked up at money lane and walked down and was soon watching 2x Spotted Flycatchers.I enjoyed them doing what they do best...catching what little there was and producing that typical call of theres.

﻿
As I made my way South I picked up my first Redstart of the day ,a nice bird perched up .As I watched it dropping to the floor and returning to the perch I saw a Whinchat fly up along the fence line just further along...., things were looking good. 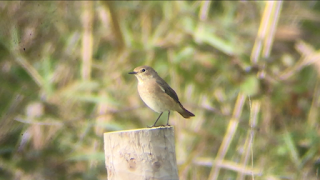 
As I walked on I quickly picked a pair of Stonechats, and then a juvenile Stonechat. I always love to see these birds ,although not as "good a bird" as the whinchat and Redstart previously seen( as regards number of sightings/rarer)  they are just all round smart and full of character in my opinion .
﻿


As I approached the pipe dump I saw Ben and we spoke about what we had seen. He had been out longer then me with some good birds seen and I then mentioned I hadn't had a Wheatear yet ,only for him to say there were 5 just further up!  I made my way around the pipe dump and counted at least 7 x Wheatears.
﻿


I stayed there for a while and picked up yet another Whinchat, my 3rd of the day and then found another Redstart.

As i walked back I picked up the original Redstart I had earlier, along with a second bird now making it a total of 3 x Redstarts, the most ive ever had in one single day! As i walked back this time up along the bank I got yet more Stonechats and  another Wheatear among other bits.
My totals for the day were-
3x Redstarts,4x Whinchats,2 x Spotted Flycatchers,6x Stonechats , 8 x Wheatears among others.
A great afternoons birding and great place.
Happy Birding,
Ricky
Posted by shaky at 22:30 No comments:

So I couldn't resist any longer and got my self up to long Stratton to see the lingering White stork which has been feeding in the fields there.  After seeing recent sightings on social media  and speaking to Matthew Shore  in the morning I decided to pull up and scan the fields.
No sign of it so I drove round the other side and there it was, working its way round the fields edge close to road.
Great views and although I'm unsure as to its history /start in life I took it for what it was .... a White stork ,in a field , in South  Norfolk, and it looked great ! 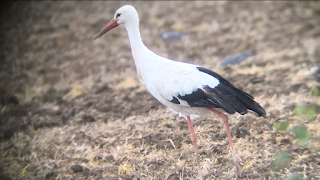 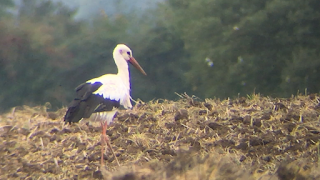 So 1st September was a day I'll always remember as it was the day I had my first Whinchat on the patch.  Only handfull of sightings for this species per year recorded this far up the Yare valley so one I've had on my list but knew it was gonna be a bit of luck to be there when it was passing through on its migration .I watched this Whinchat for a good hour as it fed , sitting among the tops of the vegetation , sometimes tricky to pick up if lost briefly . Put the news out and nice to hear a good number of other local birders connecting with it throughout the afternoon/evening and over the next day. Sadly it had gone come Sunday morning but most had had there moment with it and I hope it's not the last one I'll see here , although hopefully I'll not wait another 8 years to see one here though !This was my 119th Species for the patch.

Other things of note during September at the patch was again the slowly increase of wildfowl numbers and Lapwings too with the Highest count of Lapwings hitting 66 .  The Cormorants are occasionally seen here on the west shingle beach area(usually 2-3) but during this month numbers went from 3 birds to 15 on the 11th September. This was a patch high count for my self.
The Kingfisher was again seen on all but 1 occasion through September and 2 were seen on one day.   Kestrel, Sparrowhawk and Common Buzzards were seen on every visit and House Martins were seen flying over and sometimesstopping off  going over the broad , no doubt feeding up on migration!


Also at the patch both species of the common Woodpeckers were actively calling and seen ,with one day producing sights of a pair of Green and Gt spotted on the same day.
The Cettis Warbler numbers calling was up from 3 to 5 which is more like the regular count for here.

Now away from the Patch .On the 15th during the heavy down pour  and not being able to work I thought of somewhere nearby with a Hide...I decided to pop into Buckenham Marshes on the off chance of something interesting.
I watched the Avocets feeding with a couple Little Egrets passing over and then heard calling Kingfisher from outside, I quickly opened the door to catch it flew over east. Then bird of the day , as i saw bird out of the corner of my eye, drop on to the ground from over the river bank. Once it appeared again I was able to see clearly it was a Wheatear. A nice bird on any day this time of year in and around the Yare Valley. I watched it as it quickly flew off across the marsh.


Now to my visit to Winterton on the 13th for some Seawatching -
I decided it was that time of year that I got my self out to the coast for some seawatching. I did a few visits autumn last year and needed to polish up on the little I had learned. The stormy weather which was blowin strongly from the west may bring some good things moving but of course may not bring them close in to the east coast where I was .
I wasn't alone as there was another birder already set up and was quickly finding out what had been seen early doors. Barry and other birder had Good numbers of Manx Shearwaters and some 7x Long Tailed skuas among other bits so was positive about seeing something good myself. 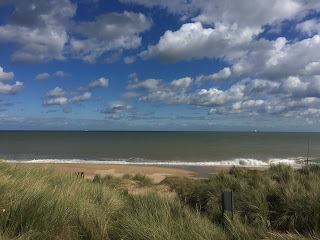 Me and Graham (fairly local birder) were soon watching a distant Artic skua before watching our first Manx Shearweater, a Lifer for myself (no.285) . In fact over the 3 hours I stood scanning the waves  along with some friendly,helpful birders(Barry and Tommy among others ) I saw at least 10-12 Manx , 1x Bonxie, 5+ Artic Skuas (1 individual close in on water) 4x Red Throated Diver ,6x Common Scoter , 2x Med Gulls and 20+ Sandwhich Terns,1x Turnstone ,2x Oystercatchers and a single Grey Heron.
Finally as September closed in I got to head to the patch for one final visit on the 26th .  I was listening to a calling Cettis warbler when drawn to a small tree near the Mooring area, of a  call of a bird I didn't quite recall.  As  I stood there I heard the bird and then saw it briefly as it came to the top,it was what I believed to be a  Ring necked Parakeet.  I watched as it flew out and along river and dropped into the Conservation area at WhitlinghamCountry Park.  I checked the call which I recorded on the phone of this bird when back in van  against a couple of recorded calls off the internet and sure it is and not another Parakeet species. Another patch tick (no.120). I picked up a large Tit Flock as I left which contained Goldcrest and my first Marsh Tit of the year as I walked back to the bridge.
Along with West Ham finally getting some good results,picking up a couple of wins, this was a great month!

Happy Birding,
Ricky
Posted by shaky at 22:26 No comments: