After the Beast from the East had past temperatures stayed cold but soon got a little milder with a few sunny days but remained pretty miserable
Highlights of the month would be the Caspian Gull I found on the 9th March. Among some Herring gulls I picked it out as firstly looking " interesting" to say the least.  I started to go through the features and at this point a couple of  birders approached me and asked if I had seen the Caspian gull.  I was now more confident that I was right to go with my gut instinct of it being a Caspian !  Although just coz we felt it was I still wasn't 100 per cent and after a few pictures and going away to chew it over ( and a few respected birders given there help as regards ID) I was happy.  This was a uk lifer for me and my 125th patch bird species !

Not as rare but for me equally as exciting was finding 3x Bullfinches on the 21st.   These stunning birds aren't rare of course but although I know there resident I'll rarely connect with em. I made sure I soaked it up , as these are my Favourite British bird .

A pair and a single Male were observed among some Thickets and brambles before making there way into some bushes and trees.
I managed to connect with this pair again on the 29th and watched as they fed among the buds . Superb birds and in there spring ,breeding plumage ,simply striking . A little video below of what I saw over them 2 days here:-
https://youtu.be/FOhi445hRGw
Now before I list some sightings , I would like to say another highlight from the month for me was seeing how keen my son George (6yr) was to come along to the Patch with he's binoculars' to see what was on the Broad . We went straight after he's footy training. It was very cold and damp but this didn't stop him insisting we went to check out what was there. I was very proud of him  to say the least! Ill Include some pictures below-

﻿
The single drake Wigeon was only seen on the 4th but not after.
As mentioned in previous blog post I had my patch tick of a Drake Pintail on the 4th & 5th , a nice Redhead Smew on the 5th and the Goosander on the 4th. But on the 18th after a fairly average visit a Pair of Goosanders flew over heading South/east which was a nice sight .

* Of note it's worth mentioning that local birder Bill had spotted 2x Red Crested Pochards in the afternoon of the 17th march , no doubt the same birds which Justin lansdell had found on Whitlhngam in the morning the same day.
I tried to find them the next day but no luck. One to look out for in the coming years !*
Back to the Broad and a couple of Lapwings sightings were recorded on the 5th , where 9 birds were seen on the West Shingle Beach and 6 on the 13th but none after this date.
A pair of Oystercatchers were seen on the 4th and there after on every visit . (Digi scpe Picture below taken by my son George)﻿﻿﻿﻿

Total of 5x Common Snipe recorded flying off from the East marsh on the 4th & 22nd but in a late visit on the 25th at least 16 were seen departing at dusk and Formed a tight flock over head.  Many more were heard afterwards but I couldn't be sure if I was double counting or not.
That same date of the 25th while joined with Matthew Shore  I had 2x Male Tawny Owls calling as darkness set and then had the joy of watching a Barn Owl  hunt around the Broad edge and across the Marsh.  We listened to at least 3x Water Rails calling as we continued to watch the Barn owl .
While we watched we were alerted to the Marsh in front of us.  A call which we both thought was not "bird like " and after a little while we agreed it was an Otter. In fact we saw one in the dyke and then at least 4 were calling in and among the dykes in front of us.  A wonderful sight to see as they went made there way through the marsh !
Finally of note a Little Egret was seen on the 13th, A single Kingfisher was seen on 4 visits and 3x Stock Doves seen on every visit accept on the 29th when I had 4.
﻿
Nice to also see a Red Legged Partridge calling on the West beach on the 15th , a bird not regularly visual seen  here .

The month ended with my first real signs of spring with some returning birds to the patch. A Blackcap seen and heard briefly singing on the 29th and then a singing Chiffchaff on the same date,  These were both my earliest spring records for these species at the patch !
In all a very good month and now ready for some calmer, more milder April with some passing and returning migrants to look out for!
I'll end my post with a quick couple of picture of my trip to the London staduim with my son George to see our club West Ham play Southampton which I'm happy to say ended in us winning 3v0 much to me and my sobs joy!
But it was our experience along the canal river and with the Ponds. Gardens around the Stadium which I wanted to share. It was great to be able to share all 3 of my favorite loves in life in one day- My son ,Wildlife and my club I support West Ham United ..... Good times indeed⚒

March ..."Beast From The East" hits the patch!

March started off where February left off...with 4 foot of snow and freezing temperatures !I was off work for a few days so spent it  building Snowmen and plenty of Snowball fighting with the kids!
But on the 4th I decided to put the Snowballs down and  head to the patch. A early start was made and I was at the bridge at 6.45am start in hope of something special .
﻿

There had been reports of 4x Drake Pintails and with a Redhead Smew on Whitligham the day before I was hopeful.
As I made my way down the west path I scanned the path and to my surprise  I saw a Barn owl perched ! A Barn owl isn't a bird seen as regularly as I would like here at the patch, In fact it was May last year that I last saw one hunting over the East Marsh and before that June 2016 so I really appreciated this moment.
﻿

I walked on after digi scoping a short clip on my phone and surprised at how close it allowed me  but with the cold and snow laid over the ground ,I'm assuming this bird was struggling with the elements and search for food.
On the water itself I quickly picked up the Wigeon pair and then a Drake Goosander ! Another to the year list but surprisingly my 4th Goosander of the winter (all 4 drakes).
﻿
I continued scanning the Broad and then i picked up a Drake Pintail at rest on the Broad Edge in among the reeds and vegetation. I waited for it to wake to get a proper look at this smart Duck but although I waited an hour (toes were frozen from standing still in the snow ) it didn't wake so decided to move on around to the south side of the Broad. That Pintail was my  124th species for the patch and as happy as I was I really wanted to see it awake so I planned to call back the next day.  I finished the morning off with 12x Shoveler, 22x Pochard,18 x Teal, 52 x Gadwall and 48 x Tufted ducks. Nice to see the 4x Little Grebes still presence too . 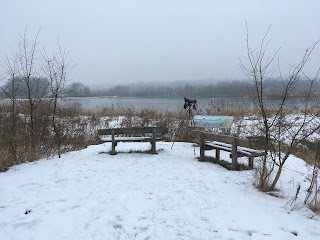 The following day with still snow laying on the ground I returned to the patch to see if I could locate the Drake Pintail . It wasn't long before I picked it up making its way along the reed edge of the Broad .

It was only out on view for 10 minutes before disappearing no doubt resting or up side down feeding. After this I picked  up a female Smew (probably the bird which was on Whitlingham the the day before). Pintail & Smew in the same day , this was proper patch Gold !
Of note also from this visit was 6 x Little Grebes (my highest ever count for this species since ive been coming here) , 9 x Lapwings, 78 x Tufted 176 x Black headed Gulls. A great few days birding at the patch in the Freezin cold snow but it had its rewards!

Video clip below of some of the birds I saw over them couple of days of the Beast of the East....
http://www.youtube.com/watch?v=hH-M12vecWg