Sent from my iPhone

August-
So I continued  the start of August as I ended July with lots of Butterflies and few moths !
I had my first Holly blues along with  Small copper and common blues, then after a days working in the sunshine watching plenty of Red admirals , Peacock and Comma one of my butterfly highlights with at least 2x Brown Angus ! While searching for these I had plenty of Small Blues and few Essex Skippers , so  the UK list is really in full flow.

A interesting caterpillar was found at work ( pictured below). James informed me it was a Vapourer Moth caterpillar - very smart looking 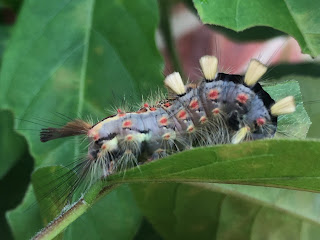 Dragonflies were also seen with a trip to Buxton Heath on 16th august which gave me a new Species in Keeled Skimmer. Found these 2 at rest in boggy ground ( walking boots just survived!)  plenty of common darters. 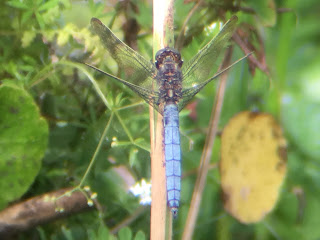 Back to the patch on the 12 th I had good number of Black tailed skimmers as well as plenty of Migrant Hawkers and on the River 2x Red eye damselflies! Super little things these. Although Small they are a beauty to see although I needed my scope as they were at rest on the Lilly's on the water ( thanks to James & Jim who had given me heads up of where I should find these ).

﻿
Now onto Bird sightings for August.  I'll start with a super work tick on the 8 th august , I was surprised to watched a pair of Bearded tits calling overhead south Norwich. Heard and then saw them as I worked.  Closest I've ever had to the city and to my knowledge .
Now to my Highlight of the month though was my trip to Rush hills scrape to see this brut of a bird.. a Caspian Tern! I arrived after knowing it had been there the day before and also at Breydon.  I decided to finish work earlier then usual and headed straight there. Surprised to find  i was only birder there on arrival but this meant I had the bird all to my self and what a bird it was.  He stuck out straight away as I watched him for around 20 minutes before he took off with all the other gulls and waders when a Marsh Harrier cruised low over. It was later reported at Breydon water so I timed it right ! This was my 284th British bird and probably one of my easiest yet .

﻿﻿
At the Patch (Thorpe St Andrew broad/Station marshes) things we're starting to change
Noticeably Lapwing numbers were up, top count of 53 end of the month. Also Tufted ducks were now back as too the Gadwall along with the Pair of Great Crested Grebes . Kingfisher was seen on every visit throughout the month and twice on this branch ( pictured) .

﻿  Always makes a visit here worth it to see this species of bird. Common buzzards were as usual overhead and the regular Kestrel. Cettis started to call as the end of August approached & single chiffchaff was singing  but other then that quiet.   Of note a Chinese Water deer was seen on most visits too.
So there's my round up of my month , hope to update blog half way through September if I find time with building work finishing and kids back to school!
Happy birding
Posted by shaky at 23:00 No comments: