The Patch last night was yet another classic patch visit ;-
As i walked around towards the Broad entrance I had a single Swallow over. I scanned the water and counted a total of 24x tufted,2x Gadwall,1x Grey Heron of note. Then as I left the Broad  to walk round towards the hide I saw a Hobby fly west over broad. At this point I had be joined by Mark and then Jeremy .Great to meet yeh !
We spoke about the Hobby passing over and about the Patch sightings of late. Jeremy had to go and we continued on towards the kissing gate and I finally picked up my first first Reed warbler of the year!
Then as we went further along we had a Grasshopper warbler - reeling! Then the night got even better as the Nightingale was back (or should I say it never went) .Me and Mark stood there soaking it up . Glorious stuff!
So today I couldn't help but get myself back down there again. I'm glad I did because as soon I arrived, not only was I enjoying the song of 1 but 2  Nightingales! 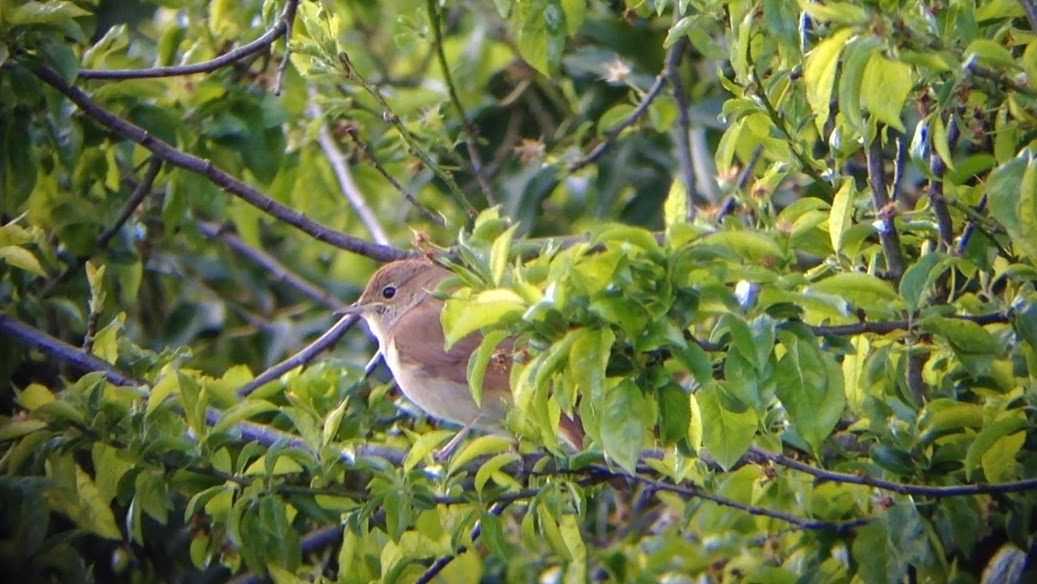 I watched and waited patiently until i had one in view. A quick bit of footage was taken:-
https://youtu.be/S2TcGFL2nRM

﻿﻿   After this I then noticed the second bird getting ever closer to the bird I was on. I was surprised how close he was allowed to get ,before they both ended up chasing one another around the shrub.
Superb, absolutely  Pukka!
That's all for now........


Last 2 weeks I've been working near Snetterton race track . The area is among a industrial estate that backs onto woods and farmland,with some wasteland full of sand & concrete. This proved to be a good spot to sit and have my lunch break.
Over the 2 weeks I had;-
LRPsx3, Oystercatcher, Sparrowhawk x2, Kestrel x2, common buzzard x4,Red legged Partridge x2,2x Pheasents, Swallows & House martins

This weekend gone I meet up with my patents at Icksworth house. A beautiful place to walk & eat. The main highlights ,birding wise were seen while walking down  to the larger of the 2 lakes , where we saw plenty of Swallows & House martins enjoying the sunshine & array of flying bugs on offer. But bird of the day was found On the way home as I passed Bury golf club in the verge opposite was  this :-
﻿﻿﻿﻿﻿﻿

﻿﻿
A female Reeves's Pheasent. I never seen this species before and although not one to put on the life list a nice surprise.
Back at work this week and by first holly blue and Orange Tip butterflies , along with this micro moth :- mint moth( thanks to David,James,Chris  & Jim for there help with ID)

Now to the patch.
I headed down the other day in hope of the Nightingale still being around but  no sign of it. Highlights being 1x Common\green sandpiper, 1x Oystercatcher, a decent number of Sedge warblers with 12 in total along with 3x Cettis and a few Swallows of note.
Another evening visit brought much of the same but a surprise came in the shape of a Stoat, seen running across the shingle spit. A patch lifer for me!

Today, finally  while at work, south of the A47 I watched the resident pair of Common Buzzards displaying ,which soon got interrupted by a Red Kite, -superb bird and great watching as it continued to share the thermals
Anyway that's enough of  a round up for this month
Happy birding
Shaky
Posted by shaky at 20:49 No comments:


Before I get to tonight's sighting I did get to the patch at the beginning of the week and had a good bit of action
On the shingle spit-
1x Green sandpiper & 1x Common sandpiper  & returning migrants in 1x Sedge warbler ,,2x blackcap. Also 4x Chiffchaffs,3x Cettis & 5 x Common buzzards!


So I decided tonight that after we had put the kids down I would head to patch, in hope of a possible Grasshopper warbler , Barn owl or Tawny owl and to simply soak up the bird song as night falls. Unfortunately  George & Sophia had different plans and it wasnt until 7.45 pm that I was at the front door and in 2 minds weather to go or not. Well I decided on going & it would turn out to have been a great choice.
As I approached I could hear many Wrens singing there hearts out in this clear night. Then my first Willow warbler of the year, followed by 3x Sedge warblers and 4x Cettis as I approached the marshes. I searched for the Barn owls but no joy as I walked ,then I heard and saw a Tawny owl chasing or being chased by a Magpie( odd behaviour ?) this was well worth the visit alone as a patch tick. But as I stood watching the Tawny owl fly over the railway line I saw a bird fly across me into the bushes followed by a Blackbird. I thought nothing more untill I heard the loudest and most beautiful burst of song ....a Nightingale ! Yes a Nightingale! I stood with the biggest grin on my face and just listened to its bursts .

This is by far the best Buzz I've had from the patch along with the Merlin . As i remind my self of all those dull ,quiet ,lonely & sometimes disheartening days at the patch,this is whats it all for .... these magical moments.

Happy birding ,
Shaky
Posted by shaky at 22:53 No comments:


So this Wednesday at 6 am I picked up james(of birdsandbeer fame) & headed to the Brecks to join up with Jim & Ben Lewis. Before we headed for the usual specialities we started off in search of the Golden Pheasent . Jim had taken me to a super little site 4 years back when we had great views of  2x males & a female . This time we drew blank but a close view of a Woodlark was nice


Then after we drew another blank at another site,  Jim( tour leader for the day) suggested we headed to santon downham. From the bridge we had Brambling, lesser Redpoll & a pair of Mandarin ducks flying up river. Then as we made our way along the path we saw a second pair of Mandarin ducks, both settling in the tree . 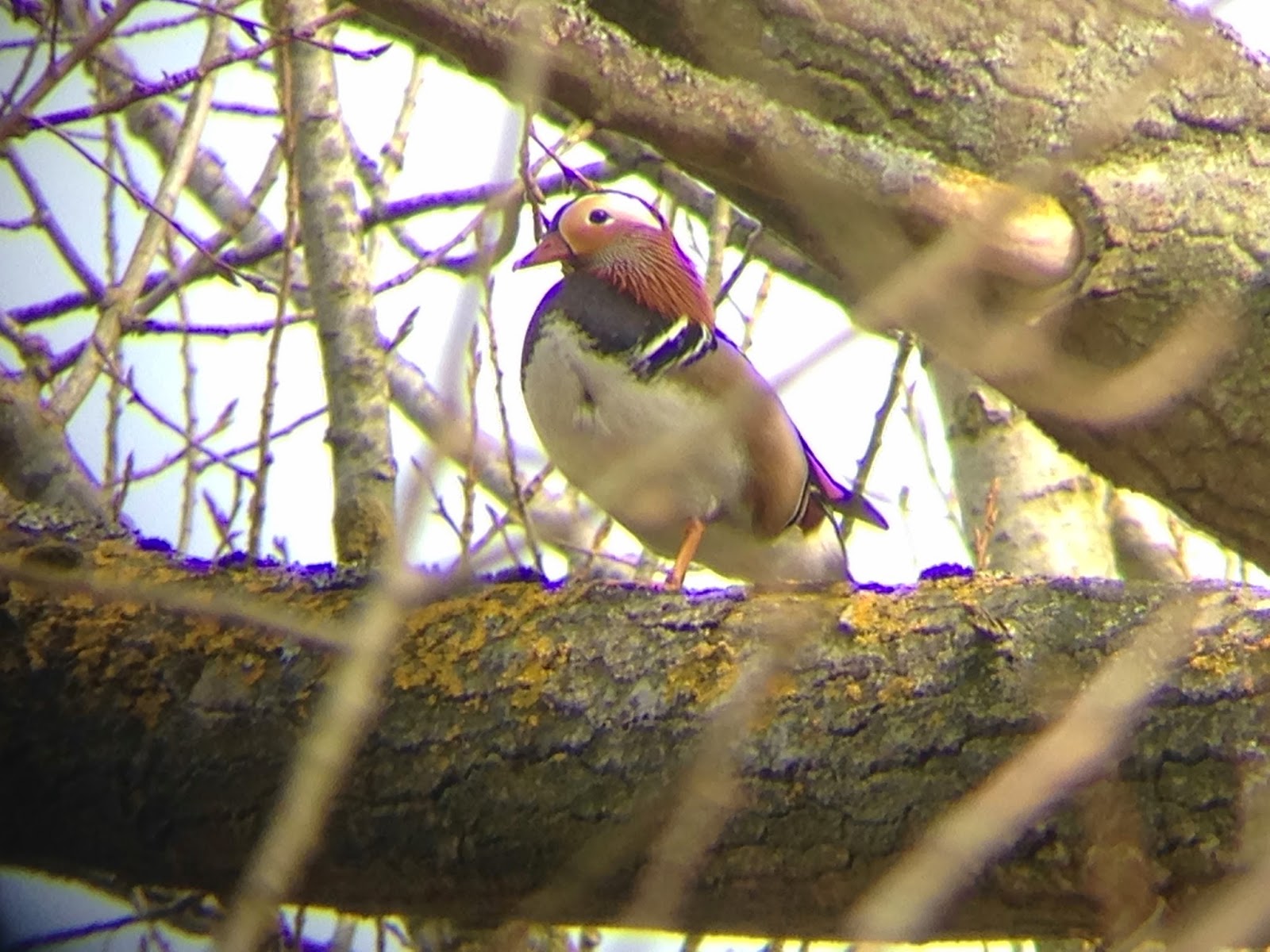 Other then some drumming Gt Spotted woodpeckers and some nice showy, calling Kestrels we decided to turn back to the cars but before we left santon Ben picked up a Goshawk . We all got on it, super !After watching it until it disappeared , with  the sun trying to break through we all decided on following Jims advice of the next site. A great decision as we soon had a displaying Goshawk among many Common Buzzard and possibly a second . We all stood and soaked up the performance it put on. Magic!
Other then a passing Curlew & singing YellowHammers we headed off to East Wrethem (but not before we had some easter treats)


﻿  We gave it 20 mintues and I had to shoot to go to work for the afternoon. I hear the boys had a good afternoon getting views of Red Kites & Stone Curlews among others.
It was a great days birding, with great company. Thanks again Jim for sorting it out!
Happy birding,
Shaky
﻿
﻿﻿﻿﻿﻿﻿

I had decided that I needed to get to the Brecks more then just the two visits I did last year and so last week I went for the Great grey shrike but before that I headed to Lynford . It was near mid day and on arrival I meet up with Joe and Will( nice to meet yeh fella!) and immediately checked out the area where the Hawfinch have been feeding on the ground . No joy but did have cracking views of Brambling & Siskin. 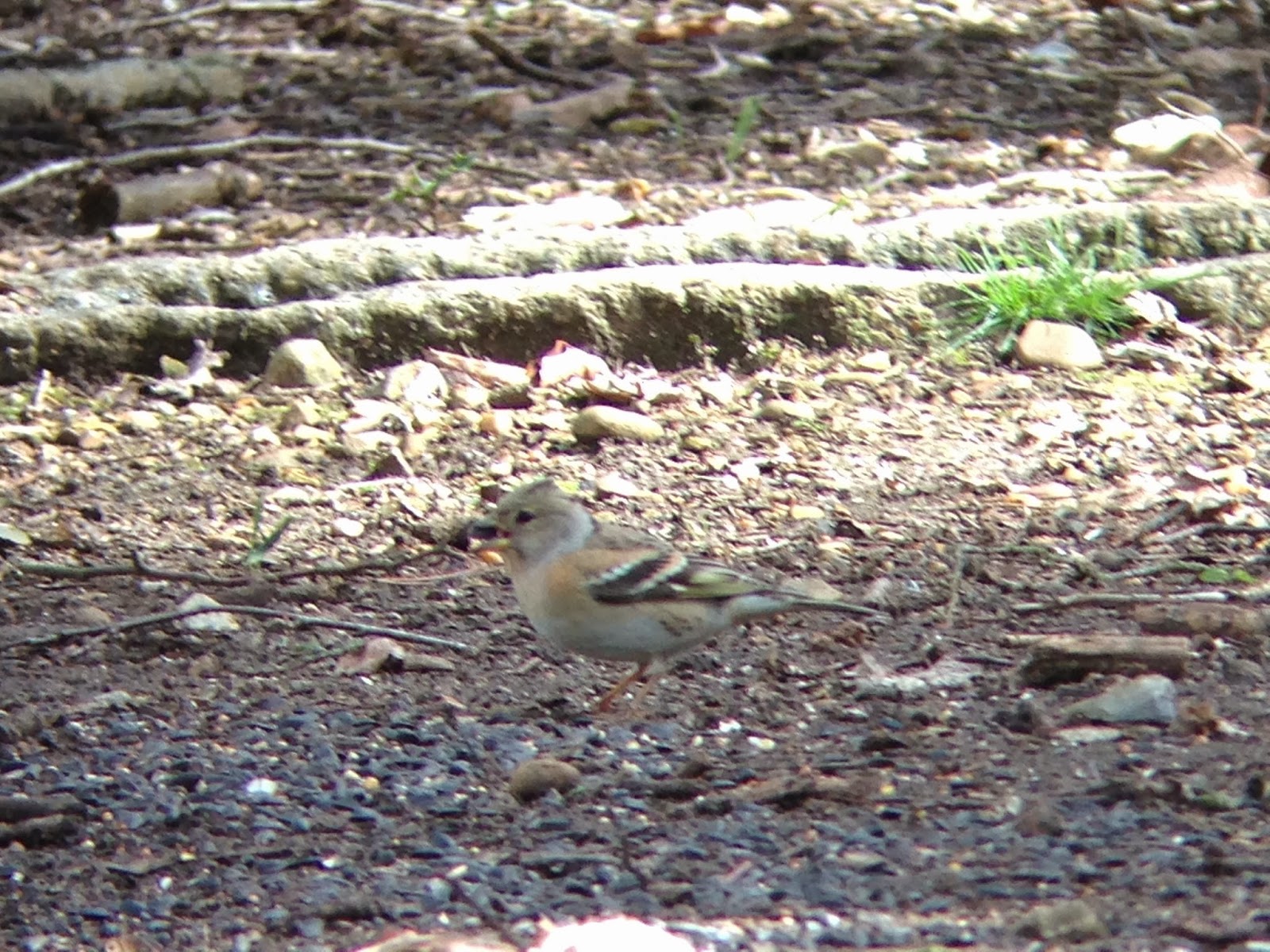 The day quickly got Better as in the pines near the Folly we had 3x Firecrest!  One even going to ground and giving the best views I've personally ever had of this species. After enjoying these super little busy birds we decided we would head to Grimmes Graves. On arrival we saw David [nice to meet yeh],a  fella we had been chatting to earlier and we all set up scanning the bush tops  & trees. Will soon picked up the Great Grey Shrike and we were given superb views. A real stunner 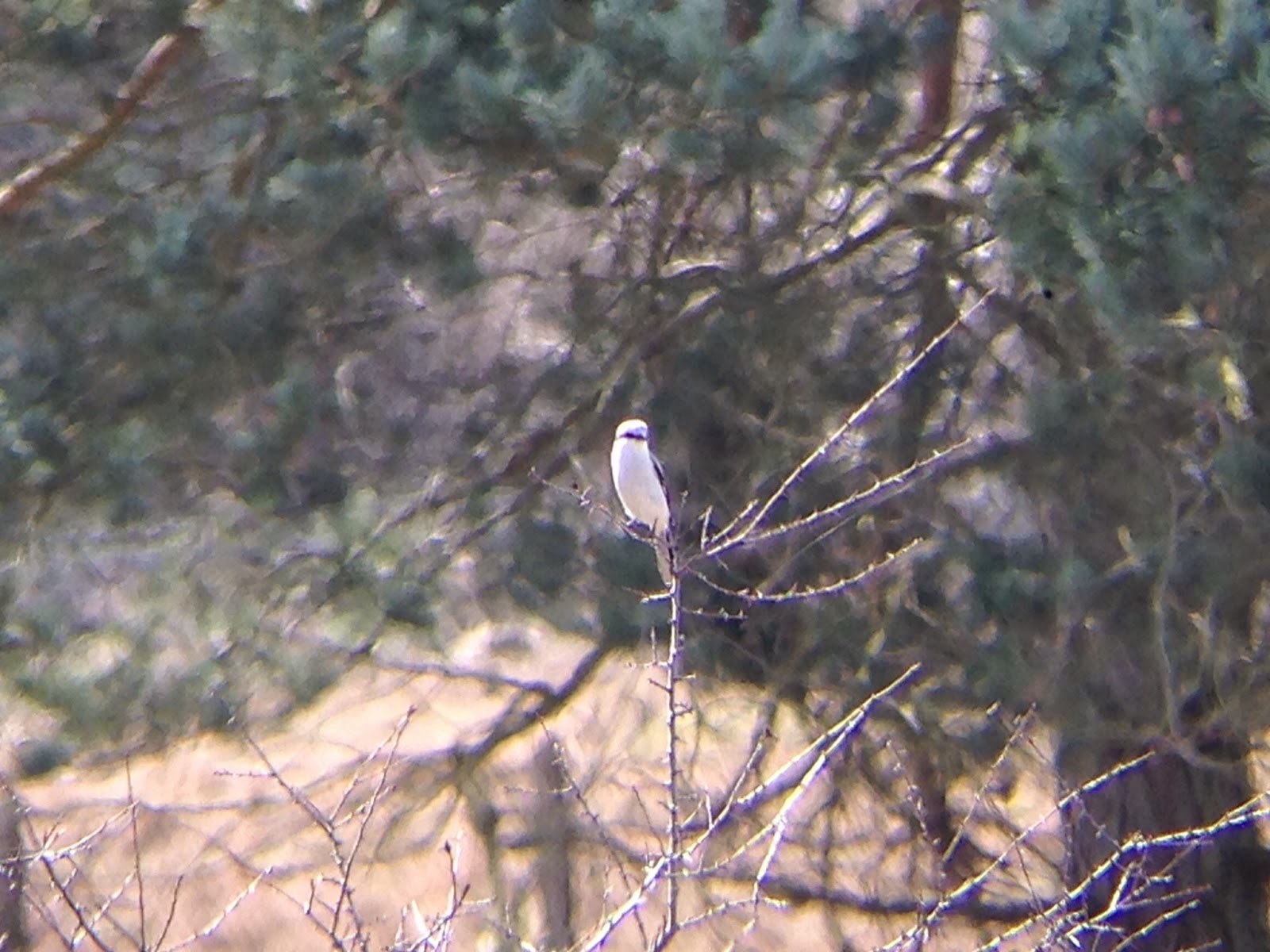 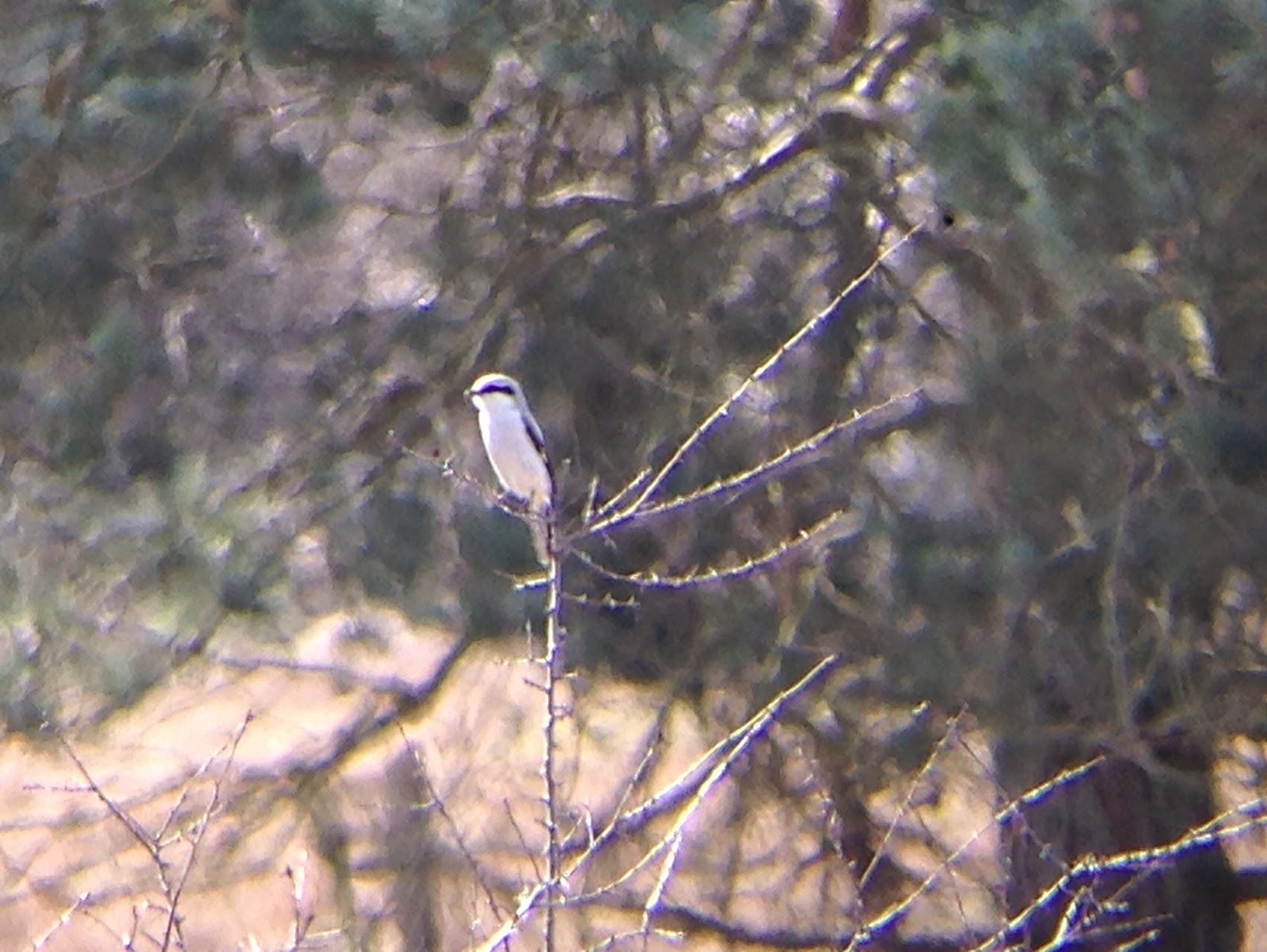 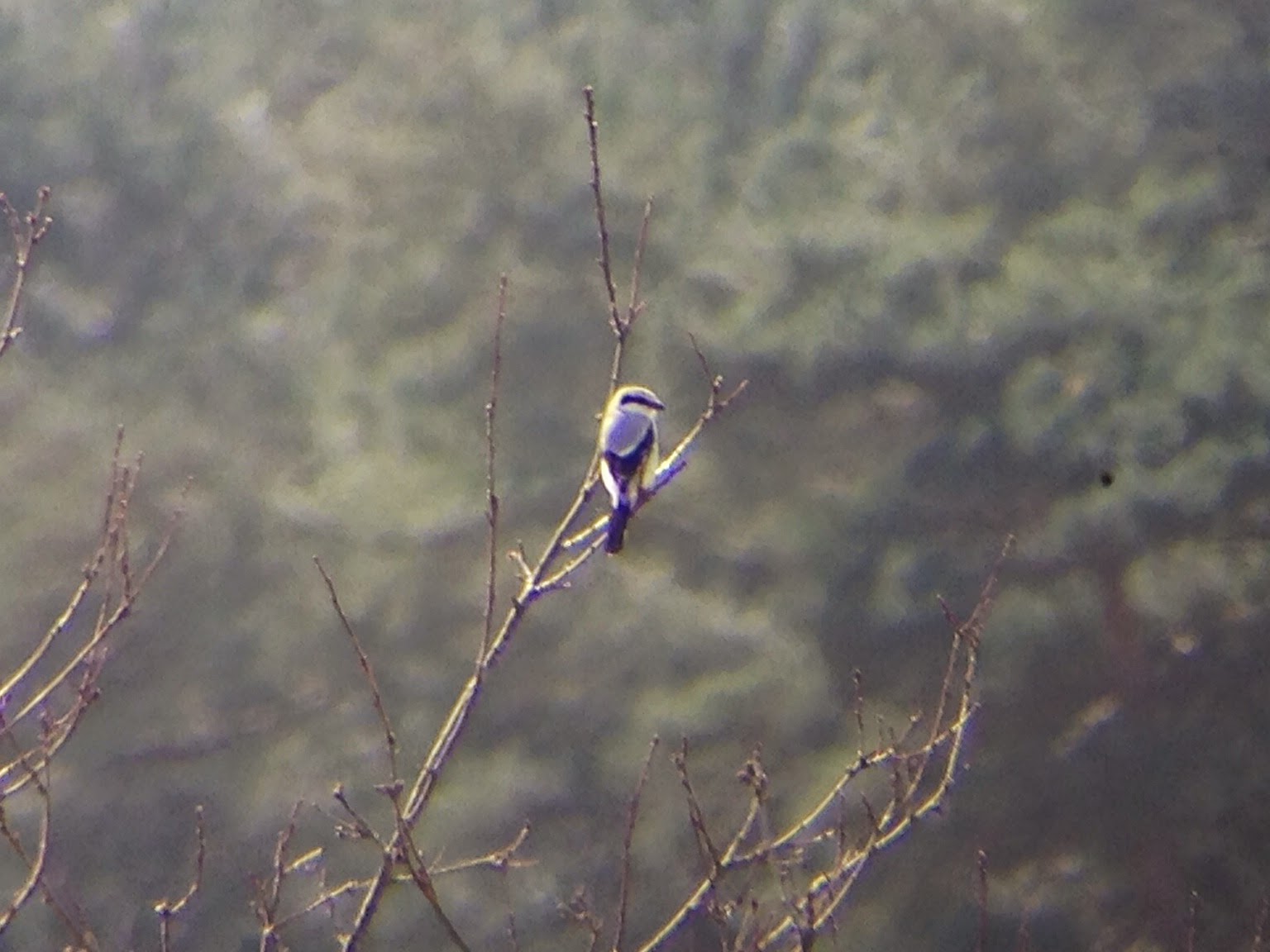 You gotta just love the Brecks,
Happy Birding,
Shaky
Posted by shaky at 21:52 No comments:

March patch round up


So I've been a bit slack lately with updating my blog so here's a quick round up :
a number of visits and highlights being -
6.3.15 : flock of Golden plover over (patch tick!)& a nice hunting Barn owl,
13.3.15- a Gooseander, & a nice Ringed plover heading east over broad.(also another patch tick)
19.3.15 -a flock of 36x Redwings ,5x Oystercatchers( my record count here) &2x Water Rails . My first Chiffchaff of the year was heard along with another & a flock of 13x Long tail tits held a single Goldcrest.
23.3.15- 31x Common gulls (again a record count here for me) and my first Reed Bunting of the year calling.
Finally a Aprils fools visit with Joe( nice to meet yeh!) produced little but noticeably the wildfowl numbers were now down to what I expected, 26x Teal, 6x gadwall & 4x Teal
All on all a good month considering precious years for this month
Happy birding
Shaky