The month started out rather cold and the Broad was still full of Wildfowl and noticeably on the 1st my highest count of Pochards for some time with a count of 24.
In fact Pochard numbers by the middle of the month were up to 67 (16th) and 62 by the end of month.  This high count of 67 was highest recorded count of the month of November and hopefully a sign of a good year for these I hope.
Staying with the ducks on the Broad , noticeable counts were :-
Gadwall-  24 on the 1st and up to 63 by the 28th.
Tufted ducks- 92 on the 8th and up to 139 by the 24th.
Teal-6 on the 8th and 4 birds seen on the 24th & 28th . These ducks are always tricky to pick up as they enjoy resting/feeding along the broad edge and often go unseen so sure there's a lot more then I've recorded .
Shoveler count of 17 on the 1st was my only sighting of this species and was my highest November count .
﻿
Now to a couple of highlights , starting with 2x Wigeon seen on the 6th and a single smart Drake seen on the 24th . Always one or 2 seen throughout the winter but always a joy to spot among the other ducks around .
﻿
﻿
Pair of Kingfishers were noted on the 1st and 8th of the month.
Also a pair of Lapwing were seen on the 6th and s single Little Grebe on the 1st.
Now a good sign that the winter is now upon us is finding a Goosander and on the 24th late afternoon I found not 1 but 3 x Drakes on the broad . I was well chuffed as I had never self found these on the patch before (previous individual birds over years gone were picked up by local birders James & Justin) . It's always a bit more special when yeh "find yeh own" so these were nice to study. These birds cruised around the broad as if they owned it and seemed so much larger then I remembered once on the Broad water . 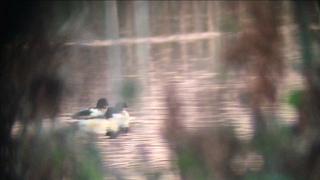 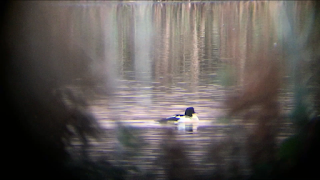 Other highlights of note:-
With  the days drawing in earlier I'm able to stay to dusk and this has helped me centre on the numbers of birds roosting at the reserve .
At least 10 x Grey wagtails were noted dropping in at the Rivers edge among reeds on the 8th .
10 x Meadow pipits were counted on the 16th and more heard as I left but couldn't be sure of how many .
Water Rail numbers again were between 2 and a high of 5 on the 8th which made for a nice noisy backdrop as dusk set in .
A couple of Siskins were heard on couple of occasions from over on the Whitlingham side of river and a nice flock of 22x Gold finch were noted on the 22nd also.
The pair of Stonechats which were seen throughout the first half of the month and then after not seen but after speaking to James Emerson he reminded me of how they went missing occasionally last year so hopefully I'll pick em back up through out December .


The Cetti's warbler numbers heard on every visit as expected and 4 birds heard regularly .
ALL IN A GREAT MONTH AT THE PATCH!
HAPPY BIRDING
RICKY