TRIPS AWAY FROM THE PATCH......
The beginning of November I decided for a change of scenery and checked out  Cantley Beet factory.  It's been 3 years since I last visited here and with a recently reported Water pipit and some number of Green sandpipers being reported by local birder Justin I headed off after lunch .
After signing in I walked up along the riverbank and was greeted by firstly a strong smell  in the air, then secondly  a flock of Redwing overhead landing in the nearby trees.
I scanned the "South lake "  and soon picked up 2 Green sandpipers which soon flew to only land and join another 3. In fact by the end of the circuit I had seen at least 6 x Green sandpipers . Redshank was soon picked up and then the first of 3 x Water Pipits .
I enjoyed watching them as they looked for food in among the mud piles . Had a chance to digi scope 2 together which was nice & as I got on a 4 th bird they we're spooked and flushed, I'm sure this also was a Water pipit but couldn't be certain .
A Sparrowhawk flew low over and then a female Marsh Harrier Which flushed 5x C Snipe  and a few Curlew.
Bearded tits were heard and seen pinging which is always a joy for me as a bird I've never had as yet on the patch .
I didn't spend to much time scanning the marshes but my attention was drawn to 2x Marsh Harriers on the floor.  I soon saw they were tagged on there wings.  I watched as they playfully hunting over the marsh and landing regularly . After messaging a local Ringer who informed me that they were tagged near Great Yarmouth and one hadn't been seen since last September where it was in Lowestoft. 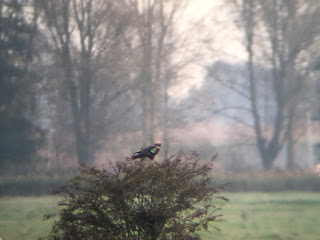 As I near completion of the lake I counted 6 x Shelducks and yet more Teal.
I completed the walk I checked out the small pools and nothing other then some Teal and Mallards.
I didn't count the number of Teal here but there was bloody alot !  Final counts of note were -
Green Sandpiper x 6
Redshank x 1
Curlew x 7
C Snipe x 5
Shelduck x 6
Bearded tits x 2
Water pipit x 3
Marsh Harriers x 3 (2 tagged) 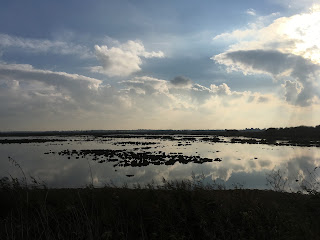 Next was my visits to High Ash Farm.
This is a place I usually try visit 4/5 times a year during summer and autumn. Usually with attention spent looking for Owls but this time I was looking for views of Brambling in yellowhammer (the later a certainty ) 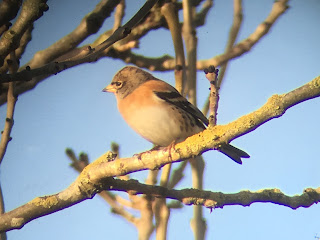 It wasn't long before I picked up a good sized flock of finches.  Mainly Gold finch ,chaffinches and some Linnet , But the birds I wanted today were in among the teasels...... Brambling!  Actually there were 9 in total as they all flew up on to the trees.  After a while I saw 2x Yellowhammers join them and before long had 6/7 spread out across the field edge calling.  I nipped back the next day for another butchers and was treated to better,closer views and got couple of nice pictures  (Digi scoped as usual ).  Always enjoy coming here and was impressed by the large pre roost gathering of Starlings too

Now to Sheringham on the 13th....
I joined Matthew shore for some Sea watching.   Arrived just before 7am as sun was rising , and quickly got set up in the shelter.  A good steady flow of birds, Gannets , scoter and guillemots mainly until our first Little Auk of the day quickly followed by a second !


The Little Auk was seen flying super close in along the shore line and watched as it headed past us west .In total we had 5 x Little Auks over the morning and was really the target bird of the day.
Was nice also to watch a Short eared owl coming in off the sea and too seeing 2x GT Northern Divers past! Throw in a Bonxie and a Long Tailed Duck and this turned out to be a  good seawatch.
A good total was had by lunch time after 5 hours of seawatching.
5x Little Auks
2x Gt Northern Diver
1x Black Necked Diver
1x Long Tailed Duck
1x GT Skua
1x Short Eared Owl
1x Eider
8x Goldeneye
3x Mergansers
150x Common Scoter
and a nice Snow Bunting among others.
Now at  Felbrigg on the 15th .......
After hearing there was 4 x Hawfinches seen at Felbrigg over the weekend I waited till I was working in Alysham and managed to fit in a visit on lunch break. As I sat in van tucking into me lunch I spotted what looked like a large headed finch drop into the small tree in front of me and quickly swapped me Ham Roll for my binoculars and there it was , sitting proud , a stunning Hawfinch! 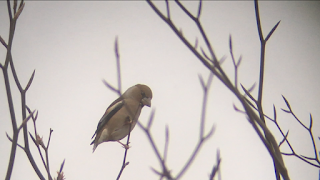 After a few minutes it flew off towards the Hall itself where they were reported to be showing near the Orangery  at the back . I made my way round and watched 2x Hawfinches fly off from the large trees and circle overhead. Lovely to see there white wing bars and to see that short tail & large head against the skyline .Also was nice to see other birders connect with the birds and to meet Simon ( local birder to the area ) and discuss this autumns Hawfinch evasion ! A great lunch break indeed and was soon back to work and feeling chuffed with the views I got.
Now to my most recent sighting. While at work on the 23rd at Welsford road in Norwich I had 2x Hawfinches fly NW overhead. A cracking sight for any birder, especially while at work!
Happy birding
Ricky

October sightings at the Patch.....

So autumn arrives and too the birds, with returning wildfowl along with some bird species gathering to roost and of course migrating birds.
Starting with the broad and of note was the return of these 3 species of duck:
Shovelers on the 13th (2 birds) which increased to 9 birds on the 30th.
Pochard - 2 birds seen on the 19th and increasing to 17 birds on the 30th.
Wigeon- single bird seen on the 26th , not always an easy bird to get here but usually one or two birds lingering if patient enough to search through the resting gadwall and Tufted ducks .
Also of note was the  Tufted duck counts- total of  32 on the 3rd ,91 on the 19th and a high of 133 on the 27th!!
A Little egret was present on the 11th and too a Little Grebe on the 27th . The later often seen on river but not on broad until winter so a nice sight .
Gulls were as usual seen regularly loathing around on the Shingle beach or on water itself .Usually Black Headed gulls but on the n the 27th a notable count of 47x Herring gulls was of note. 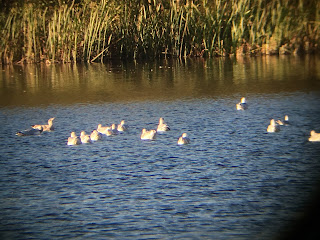 Onto the marsh flood and a notable highlight was a  Jack Snipe on the waters edge bobbing on the 11th . After I found one in spring in the same area I'm now hoping for more sightings of this smartly marked bird.
Water Rail numbers were up from 3 to 4 birds on the 30th and a total of 4 x Common Snipe on the same date .
Now probably my 2 highlights of the autumn /winter .
Firstly the return of the pair of Stonechats, firstly seen  on the 27th (of note a single reported bird seen on the 15th) , this I assume is the pair that choose to winter here last year so I hope to be seeing these for the next through months ! 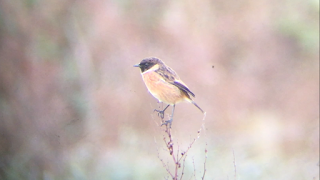 Now to my other highlight which was on the 30 th . Chippy had mentioned that he had seen a couple of Grey wagtails over bungalow lane near dusk and along with a message Justin lansdell of where he suggested the roost was ,i set my self up in position as the light dropped.  Soon enough single birds came in and a small group of 4 birds . Total count of 11 Grey Wagtails roosted but possibly 13 (2 birds seen late which came from nearby roost area) . Great to see and have them roost at the patch .
Also of note at roost is the Meadow pipits. Always a good number here in winter and I counted at least 29 birds come into roost before dusk.
A quick mention to the Redwings which have been hitting the coast and trickling in across land ,with small flocks going head on most visits towards the end of the month. Also of mention  too is the Siskin which ive  heard and seen a few times but spending most time over in Whitlingham .
And to end this Round up off i'll end with a nice sighting on the 27th, of my favorite British bird , the Bullfinch. I had 3 individuals making there way through the bushes on the broad edge and always a a pleasure to see!
So all in all October has been a great time to be at the patch !
Happy birding
Ricky
Posted by shaky at 20:27 1 comment: