Well a quick patch visit on a cold but beautiful day- I went in hope of a Sawbill and as I approached the bridge I was impressed at how busy  the Broad was. Gulls every where and probably most of the Wildfowl from Whitlingham was here! I had a good feeling so went straight down to scan across the Broad & shingle spit. There was Teal lurking along what seemed the whole of the Broad edge , along with huge amount of Gadwall & Tufted ducks. My first Pochards of the winter here too( although I sure I've just missed em on my few visits) which were enjoying the sunshine. A pair Canada geese on the water along with a plenty of Moorhen & Coots made for a very full broad.

﻿
A single Snipe on the shingle spit along with 17 x Lapwings but Sadly my good feeling of a Sawbill was wrong as none seen . A nice Little Grebe & a pair of Great crested Grebes, along the river & a flock of 7x Long Tailed Tits passed through in the trees at the bird screen . Then I picked up a Chinese Water Deer along the other side of the waters edge.
﻿
After here I walked along  to the River green further up to see if the Med Gull that Justin & James had both reported previously was still present . I soon picked it up and got a couple of pictures. Super views as it mingled in with other gulls-I've only ever had this species when up at Gt Yarmouth on days out with Yorkie & his dad so a patch tick here ,so close to he city is pukka!
While there I tried out my ID skills on the Gulls. Mainly Black-Headed Gulls, but a few Common Gulls and Herring gulls too. - I've always struggled with gulls, (probably more like i haven't been bothered enough then struggled actually )but after this Med gull turned up I should really pay more attention  ( your book is getting well used Jim!). Interestingly 1 of the Black-Headed Gulls was rung and after speaking to James (birdsandbeer) he informed me this bird is from Norway and was rung in 2012.
﻿
So no Sawbill but a patch life tick in Med Gull , so all is good !
Happy birding
Shaky
Posted by shaky at 21:37 No comments:


Firstly a Happy new year to u all( late I know but I'm a busy dad!)
A few trips out since the new year begun, which I hope will be more regular throughout the year.
Firstly a trip to horsey to see the seals on a beautiful sunny winters day with family had the added bonus of 2x Peregrines and low flying Merlin . The seals were superb entertainment for George & Sophia and they loved watching them make there way across the beach.
A trip to the patch was quiet with the expected wildfowl on the broad, 2 x meadow pipits , 2x snipe, 3x cettis, and a water rail . A dead Mute swan was interesting.
Then a afternoon out at Buckenham & cantley with Jim .
From buckenham we quickly picked up plenty of geese: Pink feet, white fronted & barnacle. Then some distant Bean geese were seen (but better views would be from cantley side ) Some Shelduck , teal and huge flocks of wigeon were soon seen along with a possible water pipit . Couple of kestrels and a Marsh harrier over were the only other birds of note.
Off to Cantley and on arrival we heard and saw a female Bullfinch ( always a pleasure), and then great views of 100s of pink feet feeding and along with a few possible Bean geese . At this point they all decided to take to the air making for a glorious sight and sound.

As it was getting late we headed to halvergate marshes but with the wind still very strong ,we weren't expecting too much but more about checking the area out for furture visits . I actually realised I had been here a few years back for short-eared owls but didn't really give it a proper butchers so this was a good slow walk. A good number of Starlings were gathering over the marshes and made for a small event. A carpet of Golden plover was nice ,A couple of Little Egrets over, a Snipe,Common buzzard, a Barn Owl, 3/4x Marsh harriers and a lonely Redshank were really the only birds of note. This was a cracking place and some where I'll be heading back to during the winter months.
During this week gone I made a point of stopping and enjoying the starling roost that's happening over the city . Best viewed from the champion pub on St Stephens round about. It's getting a really good size now and the starling murmuration is always a mesmerising spectacle for me. I watched as small Flocks kept joining the now ever swelling bunch. I had the pleasure of watching this 3 times last week and every time was pukka 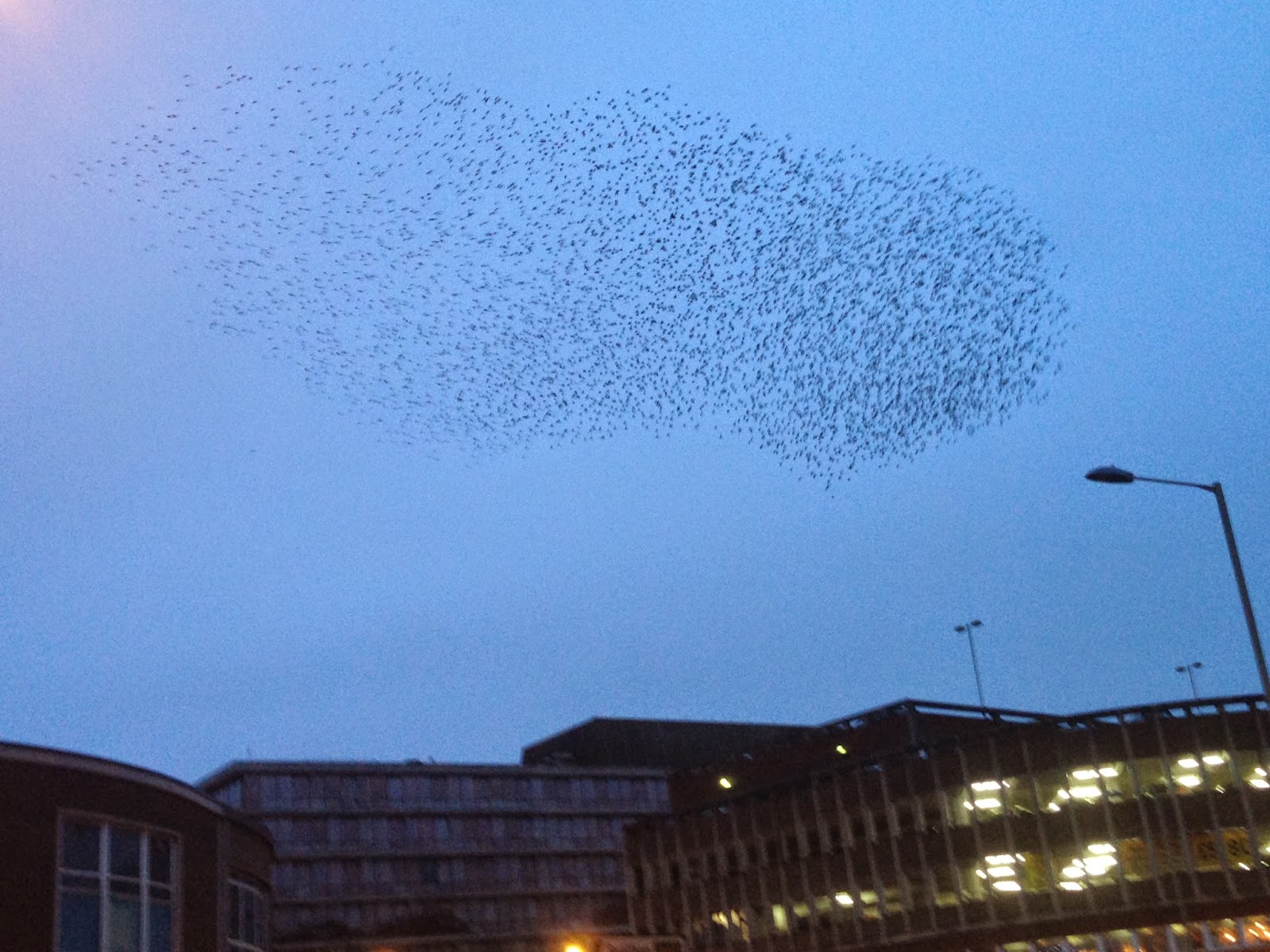 Today I was out with the family and managed to pop into halvergate on the way home to see the Rough legged buzzard. I had this in the weak already and this time it was on the deck . In the week I had it on the gate and then on the field b4 back to the post.

﻿
While there I had the pleasure of watching it with a fellow birder Angus, always nice to meet other birders and as we chatted We watched a couple of Short-Eared Owls which was a added bonus. I had them here last year too . Both hunting before one landed on a mould of mud giving the corvid an evil eye as it walked by!

Leaving there onto catfield where after a little bit of hunting I had at least 170+ Bewick swans and 27 x Whooper swans. Great swans these and as a small plane went over they all stood erect , helping with ID ing the 2 species.

﻿ Always great to have the family with me and they too enjoyed watching them in the glorious sunshine .George got his binoculars out and had the luxury of watching them from the warmth of car . Plus the planes coming and going which he loved.
So all on all a enjoyable few weeks!
Happy birding,
Shaky