Arranged to meet up with Jim on Saturday  afternoon and planned to head to Waveny forest . First though a quick visit to Surlingham church marsh. We heard a Bullfinch as we made our way to the river. Other then a couple of common Buzzards it was looking quiet until we turned the bend and saw what looked like a Tuftie but as we got closer it was clear it wasn't but rather a female Scaup! 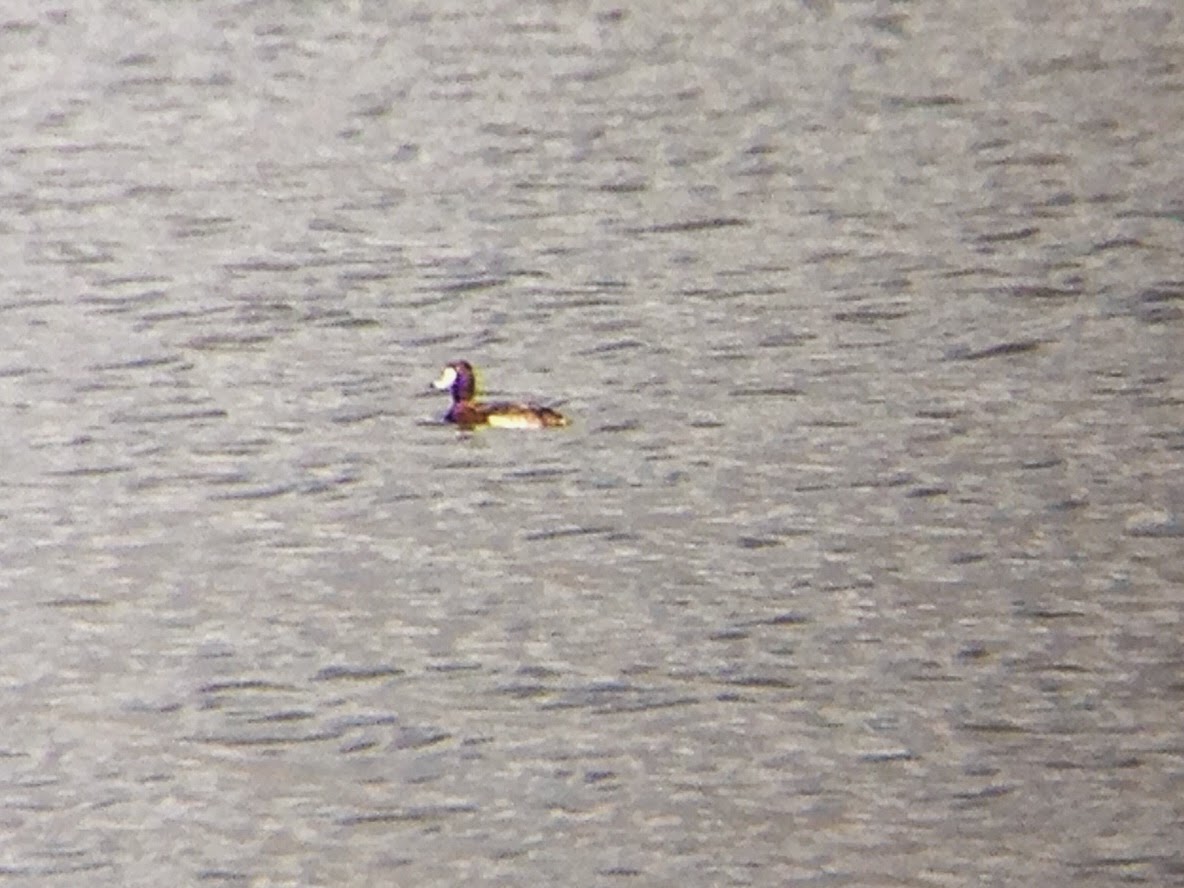 After this we decided to take alook off the track. We soon had a Woodcock take off , to only turn right for us, giving superb views . We headed to the cars and as we got ready to leave picked up 3x Mistle Thrush & 3xSong thrushes .
At Waveny forest we were treated to a heck of a sight.......at east 7 x Short-eared owls, along with a Rough legged Buzzard, 3 Barn Owl ,2 Common Buzzard, Kingfisher ! Fantastic place and watching the the Short Ears battle it out among the air was pukka . 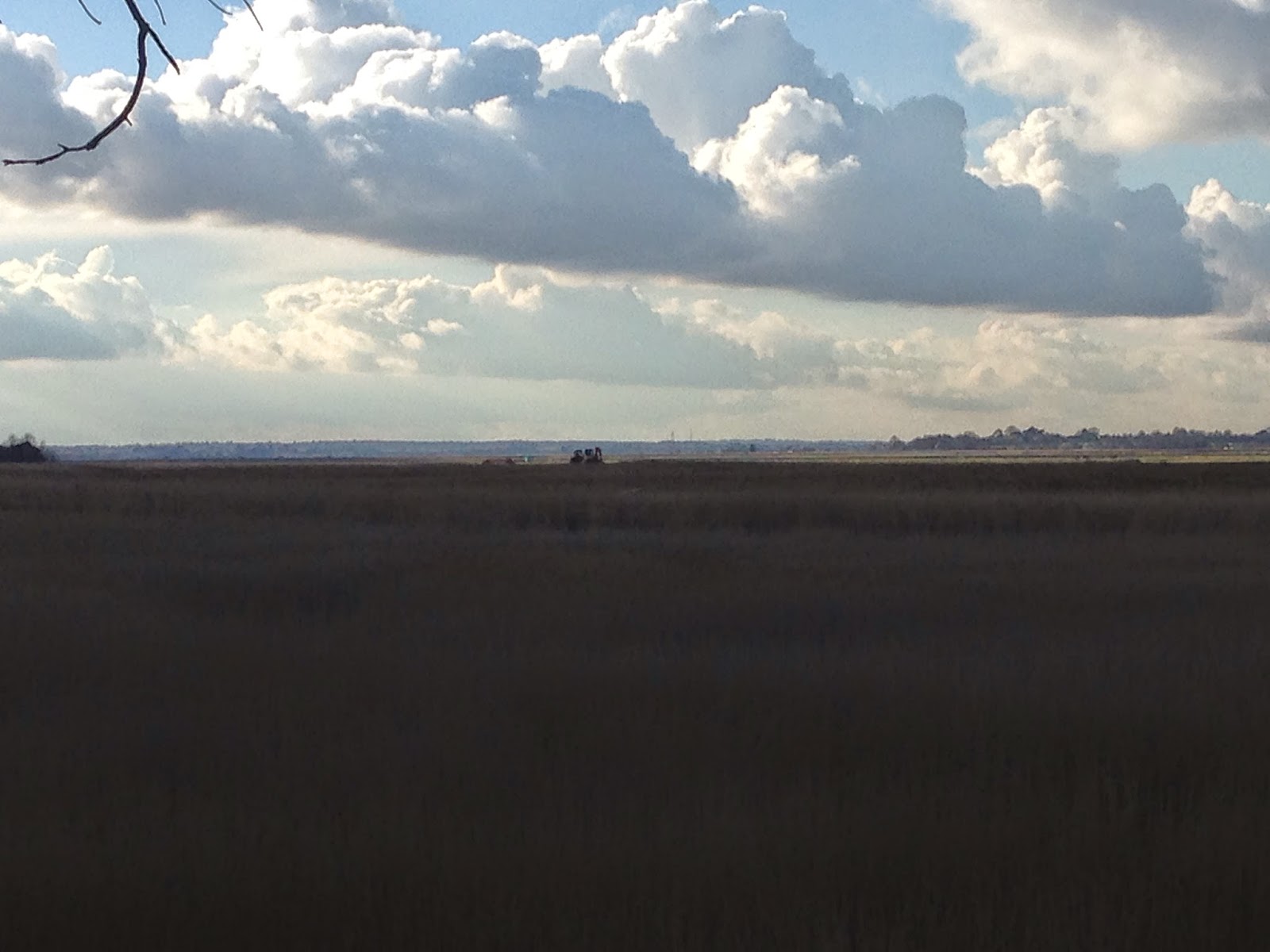 Now back at the patch today I started off with a Green Finch signing which was actually my first for year, quickly followed by  a Grey Heron and then a smart looking Jay. It was at this point I noticed the digger on the marsh. 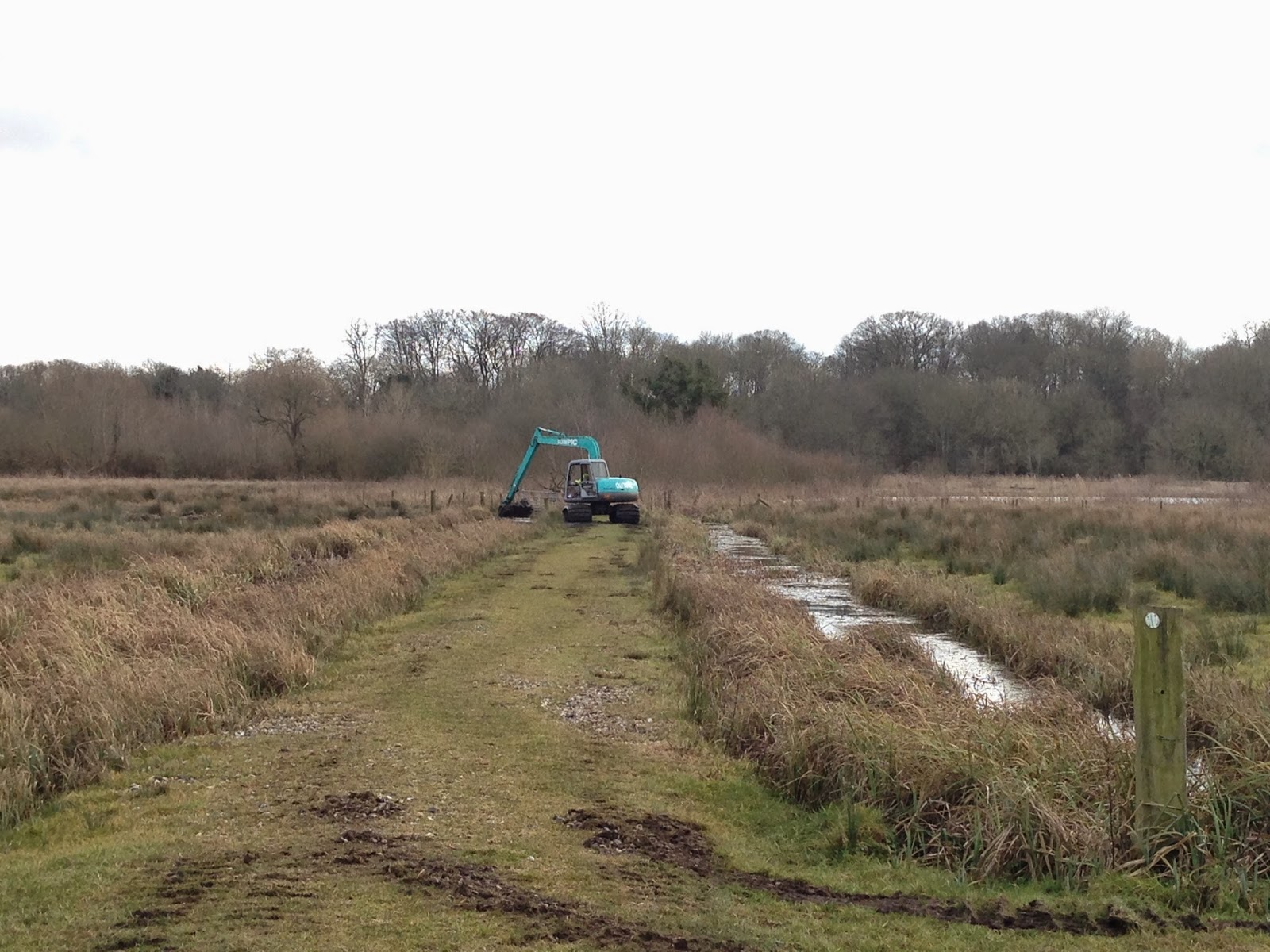 A decided to have a quick butchers with the driver who explained they were doing some work on the dykes. I decided to approach the flooded marsh and as I did i spooked a Chinese water deer, and then a load of Common Snipe. As they all took the air they flocked together and was able to count x 36 , very nice.
On the broad the wildfowl numbers were lower then usual ( perhaps some are now moving on) bit of note was 3x Little grebes. Also 12x Lapwings & 2x Oystercatchers on the shingle spit.

﻿ Also I have notices from the last few nights that the Starlings have been gathering over Unthank Road and actually attempting to land it seemed in the huge trees but then at the last second taken up and head off to the city centre. .Perhaps this is a place of meet or a pre roost? Either way it was nice. Im lucky enough to watch the Starlings from outside my house most evenings when I get home. It wont be happening for much longer so make the most of it guys!


﻿  Also a couple pictures from my favourite British bird ,taken while at work last week which made for a super lunch break 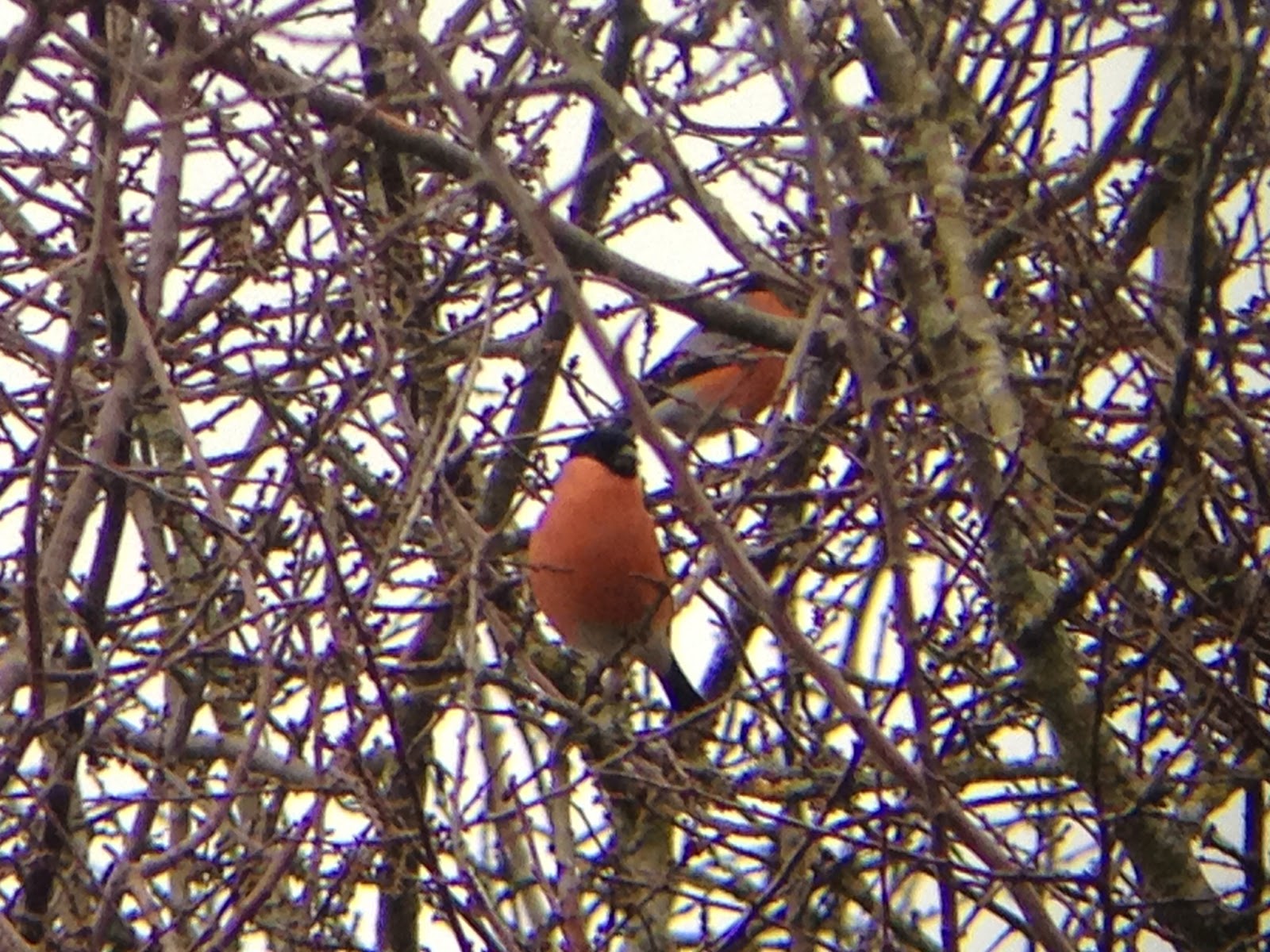 So a trip to the patch was calling after a week and a half out due to a Cold. As I approached I spoke to James ( birdsandbeer) who told me he had a Jack Snipe and where. I decided to put the wellies on and brave the flooded marsh to get a chance of one. They are probably regular winter visitors here but it's just being able to get lucky. Any way I made my way round to the cattle pen and picked up a pair of a Meadow Pipits and a calling Cettis. All seemed quiet accept for the singing Great tits from what seemed every tree & bush! As I got towards the marsh I was drawn to the tree above the kissing gate. As I approached a call that I couldn't quite see where was coming from. As I got beneath , it appeared and while flying overhead , still calling a stunning Merlin ! Wow a proper stunner, and with the blue sky shining upon it I got to see all the features. I hadn't seen one of these crackers for two years until I had one up on the coast last month but to see one here on the patch.... Pukka.   I watched as it made its way towards Whitlingham and immediately let James know. I was buzzing so now turned my attention back towards the flooded marsh. 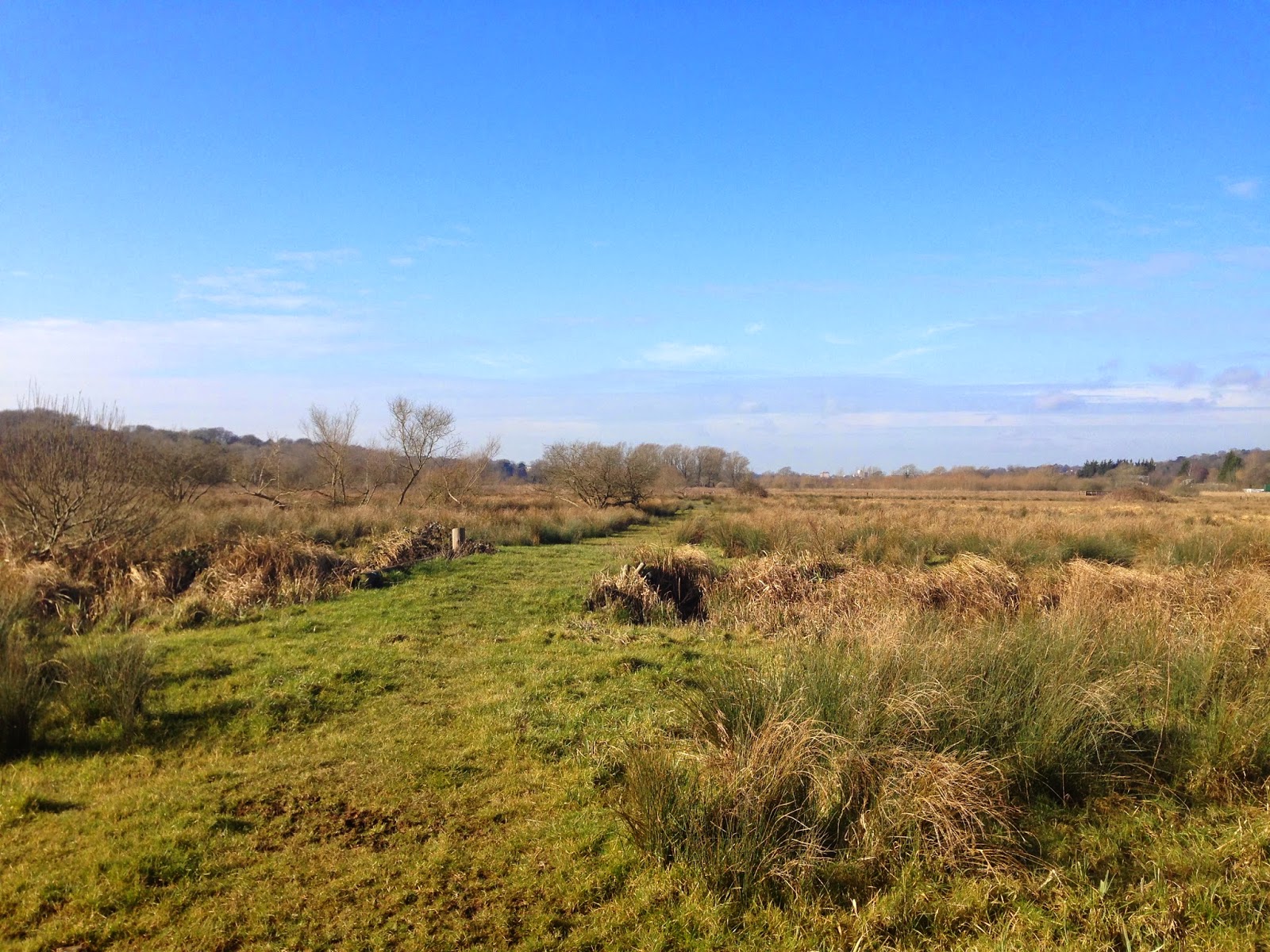 I got half way across and had out 11 x common Snipe up and then a silent, straight flying & short billed snipe. It dropped down quickly but have enough views to confirm it was a Jack . Also shortly after another which took off all together and out of sight. A total of 20+ common Snipe were seen and a low flying Grey Heron too as I got to bungalow lane. Now in the past I turn back towards the broad but I was having such a great time of it I thought I would top the morning off with favourite bird, the Bullfinch!  As I walked along I noticed these two chaps?

Very unusual to see these here but obviously someone's much beloved friends!  I checked for Woodpeckers and Treecreepers as I went but no sighting this time. I got the spot where I usually see my Bullies. It was all of 30 seconds before I heard there piping. 2x females & and stunning male. I followed them as they made there way along and picked up a Kestrel as I went.

﻿  Then I popped into a small wooded area and flushed up a Woodcock, it just gets better I thought! ( at this point I made a note to my self   " get yourself a lotto ticket shaky, your lucks in"!). Now I decided the broad was calling and a quick walk back . Plenty of gulls and wildfowl but I had just seen a Merlin, bullfinch, woodcock and Jack snipe... this broad was looking very naff in comparison so off to work I went.

A superb mornings work , with 2 x patch ticks with Merlin & Jack Snipe bringing my patch list up to 104!
A very happy birding,
Shaky
Posted by shaky at 21:40 No comments:

So a trip to the patch and 2 more year ticks. Firstly a flock of around 15 finches were regularly flying over the pathways as I made by way to the broad. They eventually Landed and my first Thought was that they were a mix of Linnets & Gold finches but in fact no linnets at all but 6x Redpolls. I was wondering if I was ever going to get on this species this winter and was pleased to have good views of them in the cold sunshine .  The broad was full of wildfowl as it was last week. Must be getting close to 100 teal there now& as I continued scanning I picked up my 2nd year tick appeared....a pair of shovelers.
On the shingle was 18x Lapwings and the ever present Chinese water deer was lurking around the marsh.
Overhead  the gulls were covering the  sky ,heading to roost and I decided I best be off too!
Happy birding
Shaky
Posted by shaky at 20:20 No comments: