A very late trip to the patch today was a pleasant one as a reeling Grasshopper warbler was heard from the bridge. I'll be back tomorrow to check if it's still there ( they stuck around last year so fingers crossed)
Happy birding
Shaky
Posted by shaky at 21:06 No comments:

The Brecks comes up with the goods......

Some pictures from a great trip out to the Brecks on saturday with Jim.
A fantastic day that gave me 2 new birds : Golden Pheasant and Tree Pipit as well as some great views of Goshawk,Hawfinch, and a Harris Hawk( a likely escapee but living very wild!), along with a huge list of birds. Check out Jims Blog for full report at jimsbirdingblog.blogspot.co.uk .
Heres a few pictures from the day: 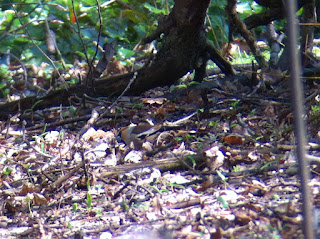 A super day and a big thanks to Jim for driving .
Happy birding,
Shaky
Posted by shaky at 21:49 No comments:

So it's been a manic 2 weeks so a quick up date on what I've seen!
I've only managed a couple of patch visits. I got my first Sand Martins of the year on 8th along with my first  Willow Warbler, 5x Cettis Warblers and the 2x LRPs still. On the 10th I had 55x Tufted ducks on the broad which was a nice count for the time of year, along with a few more Sand Martins over head-(also a Chinese Water Deer in among the reeds).
On Tuesday this week I had my first Swallows over the patch with a total of 6 and 2x Cuckoos! (A week earlier then last years) . I watched from the bridge as they flew south west over towards Whitlingham. Also 3x Sedge warblers, 2x Willow warblers and single male Blackcap and 2x common Buzzards were of note.

Now back to last week where I got my first Swallow of the year over Marston allotments & managed to nip off to blofield for Ring Ouzel which was feeding in a field along with 2x Fieldfare and also a male Marsh Harrier over.
I got to see the very showing Hoopoe too - As soon as i stepped out the van in the car park i had a Short Eared Owl being mobbed by a few gulls. A stunning Stonechat along the way to the caravan site was a joy to see but not was all the birders telling us it hadn't been seen who passed us by . I was joined with a local birder named Clive at this point who i meet in the car park & we got gassing as u do and hoped our luck was in (he had been lucky earlier in the day with views of the Osprey at Ransworth).We then noticed a few birders up on the dunes and got chatting .Tara & Andy both had not seen any sign of the Hoopoe so all scanned away and as I watched a group of gulls cross over in the distance I picked it up on the ground .Very distance views but at least we knew it was here.
We all got a littler closer but still not great views but then it took to air after being spooked by a dog only to land right in front of us. A real picture moment !
An absolute stunner & a lifer for me so I was well chuffed:-) 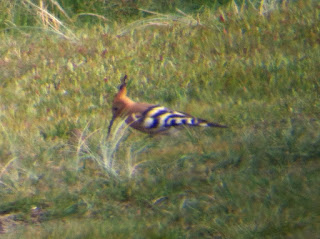 Also picked up the Bewick's swan that has been in the river Wensum for few days. This was my first view of one actually in the water as I only ever had them in the fields up at Catfield so nice bird to see and a good lunch break tick !

What's that bird? And some Sand Martins for lunch

Started off with a walk to our local park, Heighem park with little George . I've been regularly watching the bird life here and with the drizzle of rain I enjoyed the number of blackbirds and robins feeding on the tennis lawns. As I listened to a goldcrest I was drawn to another sound. It was a mixture of different songs . Sometimes a warble and then a sharp call or even  mechanical noise. It was clearly a bird mimicking other birds. After a while I noticed it was coming from some small trees at the rear of park. It was a Jay! In fact 5 were all together. I listen & watched as one seemed to be displaying to the rest of the group. I did some research when I got a chance last night and read that groups sometimes form in spring as a ceremony for  unpaired birds and a way of attracting a partner . I admit that as beautiful as a Jay is i  have usually only thought of em making that horrible alarm call of a screech they do. But now I will be looking and listening for this delightful song more .
A quick walk down to Thorpe  river after lunch with my family & father inlaw was a good idea as around 10-15 martins were over the broads. Fairly low due to the weather conditions. No binoculars on me so I nipped back a little later and had 4 x Sand Martins & im assuming that the earlier ones were too -also 6+ Chiffchaffs , 5x Cettis and a common Snipe in the air.
Another earlier arrival then last years recording for this species . Now I await for the house Martins and swallows to return !
Happy birding,
Shaky
Posted by shaky at 10:11 No comments:

It was a rather cold and overcast start to my patch visit yesterday afternoon & i started by scanning the broad first.I noticed that the Gadwall numbers were up from 2 to 4! Also 2 x Tufted ducks  and the usual resting Common Snipe which were numbering 4. I was pleased to see the lonely Great crested grebe has finally found a mate. I watched as the "weed ceremony" started,they both regularly rising from under the water with some fine selections of weeds greeting each other in a vertical position , breast to breast. This was much to the interest from the nearby nesting Mute Swan.


On to the spit and nothing but a Moorhen and then 4x noisey Oystercatchers dropped in to liven things up. I walked round to the marshes & counted 3x Meadow pipits and a few Gold finches over head. On the muddy scrape the 2 x Canada geese we're still present & then among the vegetation 2 x Lrp s appeared . They were busy doing there  'foot tapping' , in search for food.


I carried on making my way back to the van and was stopped in my tracks by a sound of a returning warbler - a Sedge warbler ! Beating my record from last year by a week. I watched it sulking low in the reeds never showing well but enjoyed listening to that familiar sound  of which o so reminds me of summer days here.
I made my way back ,hearing my 4th Cettis of the afternoon and 3rd Chiffchaff both from the trees along the railway line.
Happy Birding,
Shaky
Posted by shaky at 09:07 No comments: