Busy week but a quick trip to the patch brings a smile to me face....

Yes a hectic weeks work meant only a quick lunch break mid week and an after work visit today.
Wednesday brought  3x Chiffchaffs and 2x Cettis singing, along with some argie bargie on the spit from the Oystercatchers showing off  to one another, along with 9x Stock Doves and 3x Common Snipe.
This afternoon was a flying visit to the patch ,although i was tempted to catch up on the Garganey at Surlingham but i positively thought i may have one waiting for me here! I was greeted by a calling Lrp as i made my way along the bridge,over the marsh.I got there in time to see it land and then quickly take to air again but this time doing a different call , a display call(i the checked when i got home to be sure ).I tried to see if there were another on the marsh but with little time i had to leave. I was proper chuffed to see it again and hopefully it will be there when i return next week.Also of note was 2x Oystercatchers, 2x Chiffchaffs and 2x Cettis . Lovely jubly.

Happy birding,
Shaky
Posted by shaky at 20:21 No comments:

Yes the Little Ringed Plover i saw on Wednesday now isn't so lonely. I watched as 2 LPRs made there way around the edge of the Marsh today.They were joined by a pair of Pied Wagtails too which were as noisy as ever!

I made my way round to the hide and scanned the spit. A single Oystercatcher and 6x Stock Doves were sunbathing in the sun and some 4  resting Common Snipe were among the vegetation .
Then as i continued on looking i saw a small wader disappear & then reappear again...a Dunlin! This is probably the same one that ive been seeing on & off since 6th February.


On the broad itself was the male Goldeneye along with a few Tufted Ducks,  The other birds on the water were 2x Gadwall and 2x Teal & a single Great Crested Grebe.
2x Canada Geese flew over head as i walked back to the bridge .I had a totall of 3x Cettis and 2x Chiffchaffs.
Happy birding,
Shaky
Posted by shaky at 20:41 No comments:

Glossy Ibis and a returning migrant to the patch .....

A quick stop off at cantley gave me my first ever views of a Glossy Ibis, 4 in fact.
Stunning when viewed through the scope in the sunlight on there copper brown feathering. It was nice to also meet a couple of new birders-Bob & Tony(top blokes) as well as a face i knew in Angie.

Back at the patch i got my first Little Ringed Plover of the year! Last year i had to wait till the beginning of April for one to arrive.This lonely ,calling LPR was out on the middle of the marsh. At one point it got a bit excited over a worm (or something worm-like?).
Also of note were 4x Oystercatchers on the spit, the male Goldeneye still with the Tufteds on the broad, 4x noisy Cettis and a new patch tick in Treecreeper .All very nice indeed.

Happy Birding,
Shaky
Posted by shaky at 20:15 No comments:

I meet Jim in the car park and water proof jacket at the ready! It was a miserable morning but we were staying positive and after my fantastic patch sightings mid week (Black Tailed Godwit,Dunlins and Goldeneye) i was aware that things were happening .
We started the walk down to the River had a Kingfisher flew across then as we approached the river 4x Goldcrests in among the trees above us. Then we heard and saw a bullfinch followed by a nice singing Chiffchaff  and then Jim spotted a Little Egret on the other side of river. We continued onto the lagoon.  A counted 16x Teal,6x Gadwall, 3x Shelduck, 2x Lapwings, & 2x Grey Herons. Then everything took to the air.Then a ring tail  Hen Harrier came out from beside the hide we in and low over the Lagoon! We both got on it and watched as it scared the hell out of the Teal flock and then surprisingly watched as it landed in a nearby tree on the edge of the water. A closer look showed this to probably be young male.We were watching it for around 10 minutes as it preened its self ,before taking off and chasing a Meadow Pipit over the reeds before landing again over the back near the gun club . We decided to head off in that direction seeing only a few Long Tailed Tits along the way.We didn't manage to pick it up again but we did get 2 more sightings of another Kingfisher along with a couple of calling Oystercatchers, a Treecreeper , a Mistle Thrush, Pied Wagtail and a fly over Kestrel before the rain set in and saw us heading back to the vehicles.
A bloody good mornings work considering the miserable day that was fore casted the night before!
Some Digi scoped pictures of that Hen Harrier  below: 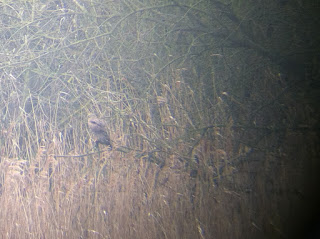 Happy Birding ,
Shaky
Posted by shaky at 22:15 No comments:

Yet another rewarding trip to the patch! A scan out along the shingle spit on the Broad and immediately was drawn to 3 bright orange beaks...yep you've guessed it, there were 3x Oystercatchers enjoying the gorgeous sunshine.While enjoying these charismatic birds i noticed a sleeping Wader. A rather smart Black Tailed Godwit.I watched it wake and then make its way along the shingle .A rather graceful Wader and a first for me on the patch. After a while i turned my attention to water and after a Tufted count of 75 i spotted a male Goldeneye.Again a smart looking bird and with the sun looking rather striking.

A further hunt for any thing else of interest resulted in:

2x Pochard ,2x Gadwall , 3x Common Snipe , before  everything took to the air and as it did i counted 11x Lapwings & then a flock of 12x Dunlin.They dropped down at the Marshes so i made my way there.Although when i got there the marsh was bare other then a few Stock Doves but i did meet a fellow birder of name Kaine.We got gassin as you do and he too had seen the Dunlin flock take off and as we spoke a single Dunlin flew by and dropped onto the broad.I left to the sound of a singing Cettis (in fact a total of 3 today)Once again it shows that regular visits to a patch although sometimes can be rather empty with bird life, other times can be fantastic and of late its been more of the latter- Long may it continue!


Happy Birding,
Shaky
Posted by shaky at 20:54 No comments:

A quick look around the patch yesterday after work was worth the effort with a calling Chiffchaff . I had to wait patiently for it to show along the trees along the river but it was worth the wait. Missed these little energetic birds-hope this is the start of many more returning to the patch this month. I've just heard that fellow birder Adam has been down today and had Green sands and Avocet so hopefully I'll have more patch year ticks to watch before the weeks out!
Also of note was 4x singing Cettis ,3x male Reed Buntings , a Greater Spotted Woodpecker and 60+ Greylags on the new cut.
The duck numbers have noticeably dropped this week as the large number of Teal is now a small flock of just 7. And only 2 x Gadwall were seen , along with a single Great Crested Grebe,although as I left around 30x Tufteds dropped in from whitlingham to make the broad look a bit busier.
Here's looking forward to the next visit!
Happy birding ,
Shaky
Posted by shaky at 17:54 No comments:

Buzzards and scones for lunch!

We meet up with my family this morning in West Norfolk, a Medieval village called Castle Acre.Plenty of ruins left behind by the Normans to check out and some nice Tea rooms too.We had some cracking scones and cream for lunch and decided to walk down past the priory towards the River Nar.
On the way we had laughing Green Woodpeckers,Long Tailed Tit flocks and good number of the usual Finches .But the stars of the day had to be the soaring Common Buzzards over the river.We counted 5 in total before loosing em again among the gorgeous blue sky and then my brother Hayden picked em up again like small dots in the sky (hes got great eyes!).

A nice Grey Wagtail spotted by dad & a hunting Sparrowhawk over the pathway on the walk back ended a nice stroll. There was time for one more Tea but i passed up on a second helpings of cream scones(watching the figure!)
A cracking Spring day and lovely company. All it needs now is some returning migrants...........
Happy Birding,
Shaky
Posted by shaky at 19:38 No comments:

A trip to Marlingford early in the day for the American Wigeon before the rain set in was a good plan with weather forecasting rain for the day.
I was greeted by smiling face in Matt on arrival and Steve who i meet at Halvergate during the week so i was in good company!

The bird was out in show among a small flock of Wigeon.It stuck out with its white forehead and was showing fairly close too.While watching this Steve gave  a shout out  of " Grey Wagtail" and as we turned ,it dropped in by the mill showing really well- very nice! At this point Jim turned up and as he got on the American Wigeon he saw a Kingfisher fly across, unfortunately i missed it though.
Me and Jim drove back up out of Marlingford and viewed across the fields near Bawburgh,We saw a nice Little Egret ,another small flock of Wigeon & Jim picked up a nice Little Owl perched. A very good hours birding.
Happy Birding,
Shaky
Posted by shaky at 20:54 No comments: