That's right I said "Seawatching"...?! A word you haven't probably seen much of you have followed my blog over the past 5 -6 years but yes it was time to drag myself up to the coast and away from the Patch . After seeing the sightings from couple weeks back I decided 2 Tuesdays ago that I should get my self up to Cley or Sheringham . I couldn't get there before 9.30 as jobs I couldn't move so I chose Cley and arrived around 9.45am and joined the line of birders with scopes and was very quickly watching a Bonxies flying close in and chasing a Blackbird ! After a few minutes it moved on and a shout out of a distant Shearwater ... Now I didn't see it although I could see what I thought was a Juv gannet but was told it was indeed a Sooty Shearwater which had been called ,I have to take my hat off to some of the birders there as they have put in many hours of sea watching over the years and can ID something so far out on the horizon which I struggle to find let alone find the features ! Any ways I won't be ticking the sooty but I was pleased to say I did see a total of 12 Little Auks which were a lifer for me and one of the target birds of the day.  My next lifer came with 2x Long Tailed Ducks which passed by West close to shore and again I hoped to see. Then a few groups of C Scoters ,a flock of Wigeon passed and 3x Guilemots were a rest in the sea giving great views. Then a couple of Kittiwakes flew west  . It was a great few hours and I started to get my eye in in a few of the true sea ducks and there behaviour/jizz. Being around those who are more experienced too helps of course.Inparticlur one birder I stood next to named "Sean" who was a diamond geezer and good company .i decided to Leave just after  1pm . I found it so enjoyable I decided to head to Sheringham the following day . I know I need to do more to get better at polishing my up my Seabird identification .

I arrived and saw 2x birders with scopes and decided to join them rather then going below into the shelter itself.  After a few minutes we we're discussing the previous few days birds and introduced each other -Paul (fellow essex boy and Greame a now local lad) were great company aswellas good help . After watching around 6 Little Auks and 8x Brent geese pass through West ,we were soon watching a distant Short Eared Owl which Paul picked up.  It was an amazing experience to see this owl as it arrived to Norfolk and we watched it all the way in as it passed over the sea and then buildings and carried on.  That was a great time for coffee and celebrated with a Chocolate biscuit ( cheers Paul) and sat watching the rather calm sea now.  The weather was a bit to nice maybe but we still managed sone more crackers. I spotted a C snipe coming in and over head along with a group of Thrushes,:Redwings,Fieldfare and a few Blackbirds. Then a cracking Woodcock  picked up again by Paul in the distance . We watched it come all the way in and over, very nice  and never get tired of seeing these birds . A female Goldeneye,Shelduck and a couple of Guilemots and I decided to leave off and to work.
It's been a good few days birding and I think I need many many more mornings of Seawatching though !

Happy birding
Ricky
Posted by shaky at 09:09 No comments:

Patching and a trip to Surlingham Marsh.....

I finally managed to meet up with Jim Bradley , we have been meaning to meet up for a while but on the afternoon of  the 26th October I found myself  finishing work earlier then usual and I meet Jim at car park and was soon watching a Tit flock making its way along the path when Jim picked out a showy marsh Tit . As we gassed away at the Hide we picked up nothing more then a few Teal and a Coot. Then as we completed the circuit we decided to take a different route.We were soon standing near some reeds and watching a pair of Bearded Tits fly over (cracking birds) and then a Common Snipe flew up as a Siskin called and soon gave its self away on the tree top. As Jim walked on he flushed a Woodcock up ,giving great views! Brambling called as we made our way back to the vehicles. A great hours birding and good to catch up with yeh Jim!

So I decided to give a patch a real good go on Monday . Target birds were the expected Autumn birds:  Fieldfare ,Brambling,Siskin and possible Jack snipe  & woodcock among others.  I arrived at footbridge and immediately heard calling Grey wagtails . I picked  up 2 as they landed (a 3rd bird later joined em). This was my first on the patch proper as only up river previously and I'm very strict with my patch boundaries! Next was a Common Buzzard overhead being mobbed my some Rooks and jackdaws. I then made my way round checking out the  Tit flocks as I go.

On the Broad:-
3x Cormorants were fishing ,4x Gadwall,mallards, 3x Common Snipe and a large amount of BHGulls.....92 in total. I'll have to check through my records  but possibly my highest count. 4x Herring gulls, 3x LBBGulls and 2x Common Gulls & a single Lapwing . As I walked up Bungalow lane a small flock of 7x Fieldfare dropped in to the tree tops and around 12x Gold finches flew over and landed in the same tree . A Greater Spotted woodpecker called as decided to check the marshes again.  A good decision  as a pair of Meadow Pipits were flying over head and then a Skylark flew over East.
Now to the bird of day ..... As I walked round I heard and then saw  A pair of Stonechats ! Now I know to lot of yeh reading this and it's a bird probably seen regularly but here on the patch it's proven pretty tough , well I say that a few lucky birders have picked em up but in the 5 plus years I've been patching Thorpe Broad/ marshes I've not ever seen one so this was a bloody good moment for me ! I literally stood there watching em both feed and call to one another.   I took some pictures as the male was still showing some nice summer plumage, a bit worn but looking smart.  After 30 minutes of soaking up these beautiful birds I wondered if I would have to wait a few more years before I see em again or weather they will stick for a while or possibly over winter ? 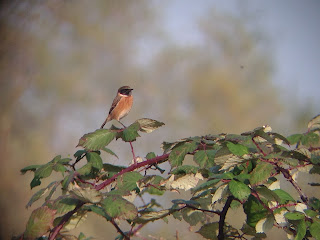 I finished off by watching 3x Grey wagtails flying off towards the river and a Kestrel along the railway track
2x Patch ticks and a very happy patcher!
Happy birding
Ricky
Posted by shaky at 21:48 No comments: