A quick trip to the Marshes after work yesterday didn't provide me with a Glossy Ibis but instead some fantastic close up views of Short Eared Owls and a stunning male Hen Harrier. The Hen Harrier was hunting near the farm and was looking rather smart in the sunshine.The SEOs were near the bridge off the Acle straight .One was so close i just propped up on a nearby gate and watched with out need for me bins-Super bird ! A good number of Marsh Harriers and 3x Little Egrets were also seen.
On way back to van i spotted a number of Herons heading towards a tree.Pulled over and saw 3 pairs spread out in the tree top. Good place which im sure ill be checking out again soon in the future. 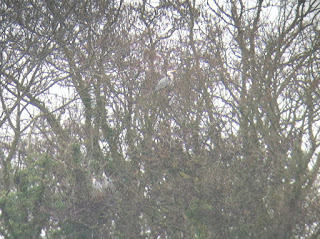 Happy Birding,
Shaky
Posted by shaky at 21:06 No comments:

I had a nip off to Barton Broad during my lunch break on Wednesday as i was working at Wroxham so i hoped for the weather to stay dry.It did and i was treated to 3x Scaup among a flock of Coots and 3x Smews (Red heads) . While watching em  they all took off (not too far away thankfully) and looking up to see why there was a Marsh harrier.I wasn't on my own as a very friendly birder was there and we got chatting.He pointed out that there were 2x Pintail over at the edge both Drakes so a real pleasure to the eye! Other birds of note were a single Gooseander (Red head) and 10+ Goldeneye.
On Thursdays lunch break a trip to Cringleford Yare Valley Walk.I work on the main road so i took take full advantage of making every minute of my a half hour break count! I didn't see any thing on the river other then a Moorhen and a couple of Mallards until i looked up to see 2x Common Buzzards circling .I then heard that favourite call of mine, that piping "Phew". Yes up along the thickets and brambles were 3x Bullfinches.Those that me or have followed my blog will know this is my favourite common bird(not so common as they were and not so easy to see either) so this was a treat.They were showing well, that is as well as a Bullfinch shows.I watched as they worked there way along and then i had to get back to work.


After work i quickly headed to Uea broad and picked up a Kingfisher in the usual spot and a Gooseander on the Broad its self. Interestingly i had 2 Chinese Water Deer run out across my path and out into the open and across the rugby pitch! I think that one was chasing the other closely.Very unusual behaviour to see them so exposed .

Surlingham Marshes and yet another Patch Tick!

After work yesterday i nipped down to Surlingham after hearing through Jim that he had seen a Northern Bullfinch there in the morning.I picked up on a group of 3x Bullfinches along the river and noticed one was slightly larger .I unfortunately lost em quickly as they flew off further along the path.I caught up with some Bullfinches a little further but unfortunately i never caught up with this bird again and did int have the confirmation of hearing it calling as Jim did earlier .Anyway Jim popped back down as i was thinking of leaving and we both got gassin about the Northern Bullfinch he had seen earlier whiling walking back past the shooting range and checkin the Marshes,As we did a flock of 50+ Teal took to air and in turn alerted us to a Ringtail Hen Harrier! We got super views as it flew right across where we were standing . A fantastic bird and well worth hanging on that bit later for.
Other birds i picked up were: Kingfisher, 3x Goldcrests, 3x Siskins,  21x Fieldfare , Redwing,3x Mistle Thrushes ,calling Reed Bunting and Greater Spotted Woodpecker. Of note 240x Greylag Geese were on the Woods end marsh . A very rewarding hours birding!
Lunch time today i got a call from James that there was a Gooseander  down at the Patch. I was only 5 minutes away so i nipped down and James still being there pointed it out.It was minding its own business and just sitting on the water .As i watched it  through the Scope for a nice close up view it took off- i literally got there in the nick of time !
A big thanks to James for the heads up,even though im sure its still about but just in case its not im glad i caught up with it while i did.


Happy birding,
Shaky
Posted by shaky at 19:55 No comments:

Well a round up of what ive seen over the last 4 days! A few patch ticks were picked up on lunch break on Thursday. A rather smart Lesser Redpoll on the Alders at the bridge was quickly followed by a fly over Shelduck.
The broad was practically frozen over accept for a Small hole in the middle and a huge amount of Teal, Gadwall and Tufted were all squeezed on to it. Interestingly a few Crows were on the ice pecking away frantically at something . This happened a few times in the time I watched em and I'm not entirely sure what it was all about but perhaps it was some insects or food that was stuck in there?

I managed a trip to Whitlingham on Friday lunch and then on the weekend too.The visit brought a nice sight, that of 3x Bullfinches near the conservation area path- good but brief views . Also 3x Siskins and fly over Snipe.
I meet up with James and Adam on the weekend and was already watching the Dark Bellied Brent Goose before even jumping out of the van! A real poser and looking smart in among the white snow back drop. We searched through the huge flock of wildfowl on the little hole of water that hadn't frozen over. 4x Little Grebes, 4x Goldeneyes and a couple of dodgy looking tufteds!
A walk up to the east end of the Broad saw a huge number of Teal gathered up on the patch on Thorpe broad-James counted 250+, very impressive number. It was then that both the lads shouted out "Smew!".I looked up and watched as it flew over and dropped in to the hole of water back on the great broad . We picked it up on walk back later and also I spotted a rather smart Water Rail making its way along the reeds edge on the north side of the Whitlingham broad. A nice but cold mornings work!

Happy birding,
Shaky
Posted by shaky at 20:00 No comments:

Snow at the Patch provides its gems!

A walk around the snowy Marsh and Broad was a real treat today. I was hoping to catch up with one of the Siskin flocks and maybe a Redpoll tool- well i was in luck, because as i looked along the Railway track and watched the Foxes play chicken with the Train, up in the Alders was 11x Siskins,- a good search but no Redpoll but i know ill catch up with em soon!
I made my way along to the Marsh and as i did i heard a Water Rail calling from the channel along the Broad and Marsh. Once at the Marsh i noticed a huge gathering of Gulls.A search through and some 8xSnipe were resting up at the back among the vegetation along with 22x Lapwings and then everything all of a sudden took to the air- i looked up to see a falling Grey Heron! It was diving (in a sort of clumsy Heron way) and then swooped down and up.It didnt seem to get anything but made for a good Ariel display and filled the sky with Gulls .
I continued round and noticed a small flock of Linnets over head and a couple of Teal took to the sky out from one of the channels.As i walked further i heard and then saw a Water Rail. It took off across the path into another channel. i was unable to pick it up again but that brief view was enough.I hope to get better views here while its still cold over the next few weeks.
I made my way round to the Hide and counted up the Ducks on the Broad:
39x Teal
50+ x Gadwall
31x Pochard
As i turned to head back i glanced over to the River and scanned the banks.Im glad i did as i got to see a super Dunlin!(ok not the most super looking wader your see but here in Thorpe ,now thats super!).
I got to watch it make its way along the bank and then take off to only go back to where it started.
I got back to the van with cold hands but with 3 new patch ticks -Siskin, Water Rail and Dunlin, Lovely Jubly.
Happy Birding,
Shaky
Posted by shaky at 20:56 No comments: