Seawatch brings a lifer and a late patch visit ....

As I did last year I turned my attention to the sea.  I choose Winterton as I was helping out with my son George's School trip  at Hickling Broad, so had 2 hours free before hand.  My targets were Auks &  Skuas , Little Auk & Pom Skua being top of the list  .
I arrived at the Sheds and soon caught up with what had been seen early doors by Mick Davis and steve Chapman . As we spoke I quickly connected with a tiny black & White Auk which was going like the clappers heading North . A nice Little Auk which was to be the only one of the day for myself . 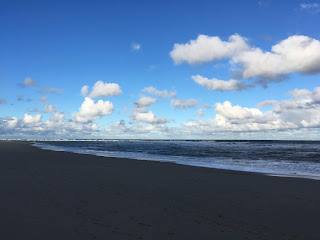 Then a fairly close in Bonxie which was harassing a gull for its food .  Then Mick pointed out a RazorBill sat on the sea fairly close .   This was a great view of a bird I only previously  had in flight and often struggle to ID when far out(usually just go down as guilemot in me notes ).  The Auk was showing its Thick Bill, Rather Bull neck and what seemed to be a longer pointed tail then the Guillemots have.
Then our 2nd Bonxie of the day. As we all got on it another Skua passed by it in scope view.  This bird was less" bulky " and had different flight behaviour to the Bonxie.  The lads called it as a Pom (Pomarine ) Skua which was great but I needed to try get some more ID features before I could tick it (these regular Seawatchers know there birds well unlike me !) This was a dark form Pom , and I soon got white wing flash . More heavier then Artic Skuas but not as much of a bruiser as the Bonxie we have been watching.   Soon enough there was a 2nd Pom Skua and this one was showing "spoons" ( the Broad long  tail shaped like a spoon) but unfortunately for me I struggled to get that unlike the others managed.   At this point Nick and he's son John joint us.  We had a 3rd Bonxie Skua before a large number of Starlings coming in/off the sea and overhead .
Plenty of Red Throated Divers on the sea and moving north & south.
Then a couple of flicks of Common Scoter passed . I got on one flock and soon saw there was a Velvet Scoter in it and  called it out. The obvious White patch /panel on the wing showing nicely as it passed by heading North.

I then noticed what seemed to be a Auk
Washed up to the shore.   I decided to check it out and soon realised it was a Guillemot - poor thing .
Then a trickle of Guillemots and a single Sanderling which flew out from in front of us and then south over the sea.
Brent Geese heading North and 3 x Eider North ended off a nice session .
I quickly packed up and got off to  Hickling Broad to spend time with my son George with hes classmates on  there school trip, which was very educational and great fun for the children (and daddy!).

They left off at 2pm so I headed back to Winterton for a late afternoon sea watch & then walk in search of the reported Snow buntings .  The Snow Buntings were North of where I was & quite a way up too.  But it was s cracking walk as the sea was quite choppy and no one around.   I have to say I enjoy Birding on my own , probably due to me patching on my own so much .
I passed a few Seals in the sea close in and a nice flock of Eider passed Northwards .   Then after the 3rd line of Rocks I picked up the flock of Snow Buntings! There were 11 in total and they were more then happy to come land about 20 feet away from me .  I soaked it up as I haven't had time to connect with this species for a few years so was a good Moment to study them .
Best bit about it for me was I had them all to myself, no Dog walker or   even a Birder in sight .

I decided after 40 minutes with en and a quick glance at the sea to start walking back. As I did I had a close in Red Throated Diver which was nice .

I got back to the van and realised Mick had kindly put my Seat & pad on my Bonnet (top bloke !). Must of left it at the sheds in the morning while rushing off!
Later this week I decided to spend a hour or so at North denes, Great Yarmouth as again I was helping out at school trip (sea life centre) this time for my daughter,Sophia's class.
A nice flock of Meadow pipits greeted me on arrival and soon I was watching a Red Throated Diver close in .
Huge amount of Cormorants were out at sea along with Gannets and the usual expected gulls.

I decided to spend a few hours walking up California beach.  My first visit here and was a great spot for future visits in sure although today was rather quiet.  Highlight was a Rock Pipit which flew in nearby and settled on a Rock.  Then a smart Adult Med Gull was on the sea among BHGulls .
RTD were passing by in singles and a Single Guillemot headed North the only other bird of note.
So a good couple of enjoyable Sea watches this week with a Lifer in Pom Skua too!
PATCH-
Just the one patch visit this last couple of weeks , on the 5th November. I decided to go an hour before dark to focus on doing a Roost /Pre-Roost count at the marshes and broad .
The water was empty , apart from some Black headed gulls which soon flew off East .
A Flock of Gold finches gathered south of the Broad & 2x Gt spotted woodpecker called as I made my way round to the East marsh and found my favoured spot ,ready to note what drops in and passes overhead.  As it approached 4pm the sun started to set and the Meadow pipits started to drop into the marsh.  Around 10 gathered overhead calling away as they slowly dropped in. By the end of the visit I would count at least 24.
I then noticed my first of 7 flocks of Starlings going over East.  I took pictures of each flock and later would count them as best I could . I made it around 3,000 Starlings in total.

The Magpies had now gathered up to 20+ and were now in the scrub/trees and stayed there till when I left, well after dark so assumed they roosted in there ? But knowing if the Roosts over the water at Whitlhngam I wondered if they may have left to join it .
Ducks were dropping in at dusk and list as follows-
Shoveler -3(2 drake)
Tufted -9
Mallard-11
Then a C.Buzzard flew North low over the Marsh. Not used to seeing a Buzzard so late in the day .
Of note 2x Cetti's warblers were heard and As I left a Tawny owl was calling and more Common Snipe departed from the marsh given a total count of 8 but more I'm sure as darkness set in  , a great visit !
Happy birding 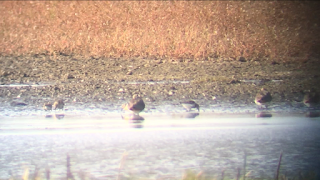